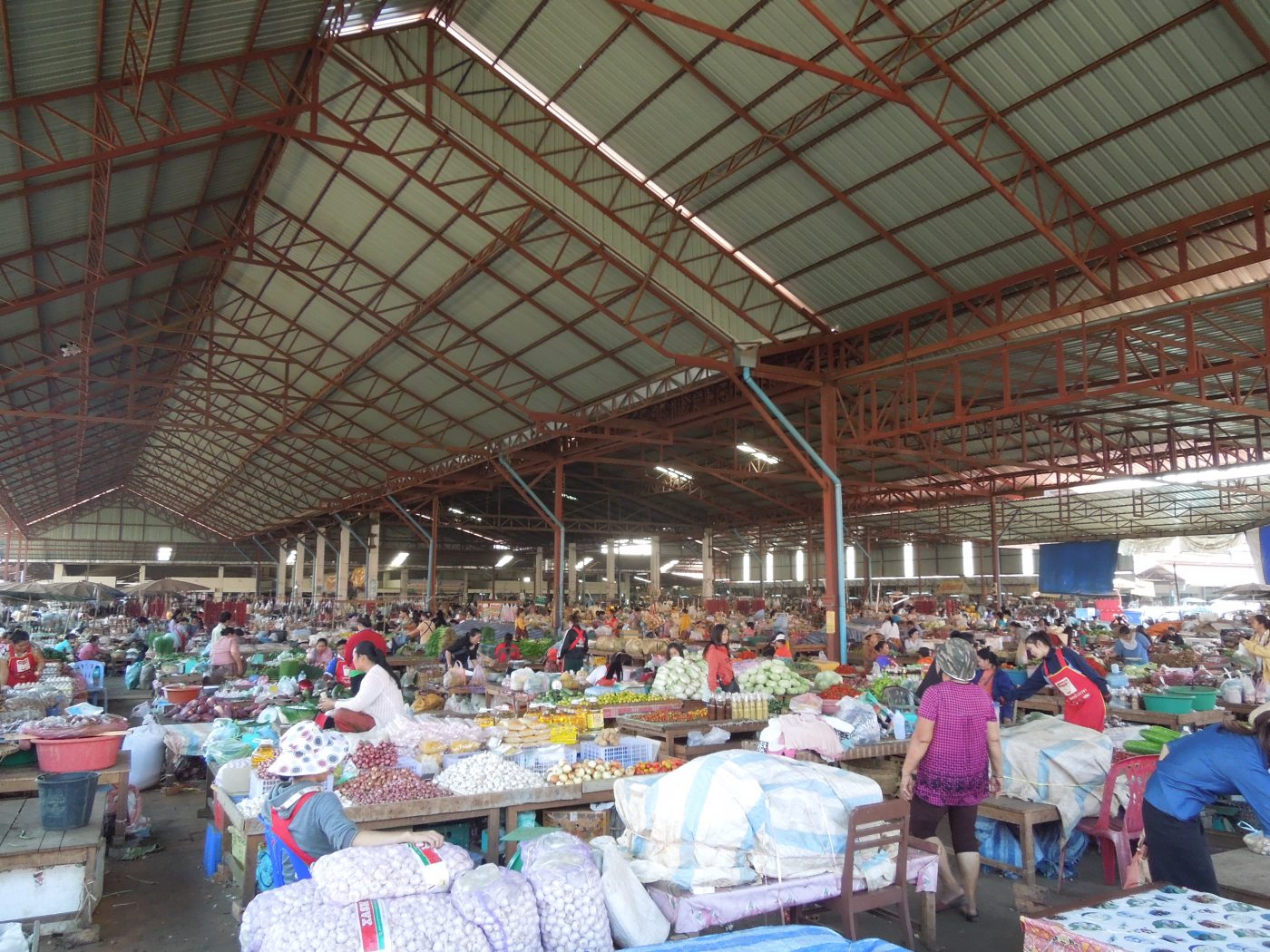 With few options available to us we booked a sleeper bus to take us the 10 hours from Vientiane to Pakse. We were told we would be collected at between 7 and 7:30pm. Well 7:30 came and went and at 7:45 we were getting nervous that we would miss our 8:30 bus. Eventually a van arrived and we struggled into the small seats for the 20 minute ride to the station.

On arrival we were given tickets and pointed off in a random direction, fun! Once we eventually found our bus through the dusty maze, our next mission was to find our bed. We had been told there were no allocated seats, so with that in mind plus our late arrival we struggled go find any free beds. After about ten minutes of utter confusion we eventually found our bed ( yes we did have a seat/bed number after all!). Our bed was on the upper level at the rear of the bus, and manoeuvring through the bus to get to it (and later on to get to the toilet) was like contorting yourself through a rabbit warren! The bed was not as small as we expected but was still small. Sam could just fit her 1.63cm body in the length but there was no hope for Will.

We were both nervous and excited about the bus trip. At just before 9 we left the station, the bus rolled and swayed as it negotiated the potholes. At that time we were thinking that this was going to be a bumpy ride!

Well we survived but seriously it was scary at times. The bus must have been travelling along at 120kph and the roads were not as smooth or as wide as you would like at these speeds. Will didn’t sleep at all as every time he drifted off he was jolted awake by the movement of the bus. At one point he watched as, at ludicrously high speed, the bus swerved in front of another bus that was trying to overtake. The mirror of the trailing bus clipped the rear of our bus leaving a large scar which was visible when we got off at Pakse. *gulp*

At around 6am Sam struggled awake, scooped up our belongings we exited the bus. We had survived but we needed a coffee.

After a half hour chill drinking the most expensive coffee of the trip we set off in search of out hotel.

We had booked our accommodation online as we had many time in the past, we had a rough idea where it would be and we started walking, well by 9am we were in 30 degree heat and exhausted, we were asking everyone we could find if they knew where the hotel was. We asked all the tuktuk drivers along the way… Nothing! Hot, sweaty and exhausted we finally gave up searching after two and a half hours flagged down a tuktuk and got him to take us back to one of the hotels right in town. Luckily they had a room it was cheap but more than sufficient and we could finally have a shower to cool down.

Pakse itself is a small town on the Mekong with a population of around 60,000. There is not much to see in the town itself but it is a great base to explore Champasak and the Bolovan plateau. We stayed two nights in Pakse exploring the markets and local area around the Mekong.

We decided to head to Champasak for a night and just take our small day packs, a really nice change. We woke early and headed to the market to catch a local bus called a Songthaew. We were told at the information centre that one left at 9am and took an hour and a half to get to Champasak. As usual we arrived early and wandered around until we found the right bus. Bus is a rich word, essentially it was a flat deck ute with bench seats either side and a steady canopy with a giant roof rack.

As we arrived there was a old lady and her granddaughter already waiting. We jumped in and waited, and waited, and waited some more. As we waited more and more people arrived and more and more items were shoved under seats and on the top roof rack. Finally at 9:50 we departed. The road was relatively flat and straight and the free flowing air allowed us to cool down. After a steady drive for 45 minutes (the only time we have been on time in Laos!) we arrived at Champasak.

We climbed out and found ourselves on a dirt road in the middle of a small village dotted with guest houses. We were approached by a big man with an even bigger smile and asked if we needed a room. For 50,000kip or $7.50 NZD we had a fan room with double bed and hot shower, and a large communal deck overlooking the Mekong river. What more could you ask for? We decided to take a walk but within 500 meters we were hot and hungry, so we headed back for an early lunch.

By 12 we were ready to explore Wat Phou the, the reason we were in Champasak. The Wat is a 12th century Hindu temple built in the style of Anchor Wat ( in Cambodia). There was even once a road directly linking the two important sites.

The site is quite large and set up so you look across a lake to a small stone wall, behind which you see two buildings with a wide…why am I trying to describe it, look at the pictures it’s a lot easier!

Wat Phou is an amazing place, not recommended in the heat of the day, but will reward any punishment that your body endures 10 fold. Simply stunning.

We walked along the old roads and climbed the ancient stairs to the temple. We were thanked for our efforts by an amazing view. This is the life!

We chilled for the evening, leaving the deck just long enough to book a boat home for the following day.

Note to self – do not eat western food like salads in tropical places. Sam was up all night throwing up her warm salad! (And poor Will had to stop watching his movie to hold back Sam’s hair).

Before leaving for the boat we had a last wander around the town and a spot of lunch… Sam restricted to plain rice and soda water.

The boat was due to depart at 2 so at 2:30 ( Laos time) we were collected and taken to the boat. By three we were cruising along the Mekong, chilling in our deck chairs.

By six we were reunited with our packs and ready to enjoy an evening in a more luxurious aircon room.

The next day we woke early and ready to explore the Bolovan plateau. As is often the case in Laos you can not get to many of the main sites by yourself, so we booked a tour.

Our mini van took us to both coffee and tea plantations as the plateau is the largest producer of coffee in Laos. We were able to sample the local green, yellow and black tea along with a very strong smooth black coffee. We visited the Tad Fan falls which, at 120meters, are the tallest waterfalls in Laos. We stopped at several local villages to see village life, but really it was to see if we would buy scarves.

We stopped at the Tad Lor falls for lunch, the restaurant had a prime spot but the food was a little lacking in taste and size. After a few wrong turns we managed to find the falls for swimming and took a well needed dip in the pool created by the waterfall. We had a Italian man in our minivan who had a tendency for taking his time, when the driver said 20 he took 30 minutes. By the time we had rushed back to the minivan after lunch we were told we would leave in 20 minutes, 20 became 30 became 40 and to be honest we should have just left him there. Our last stop was Phasuam waterfall. This waterfall was amazing and had a amazing bamboo footbridge which made for some fun. All and all a great day but to be honest we were tired and ready to just relax.

Next stop 4000 islands, where relaxing is the name of the game!!