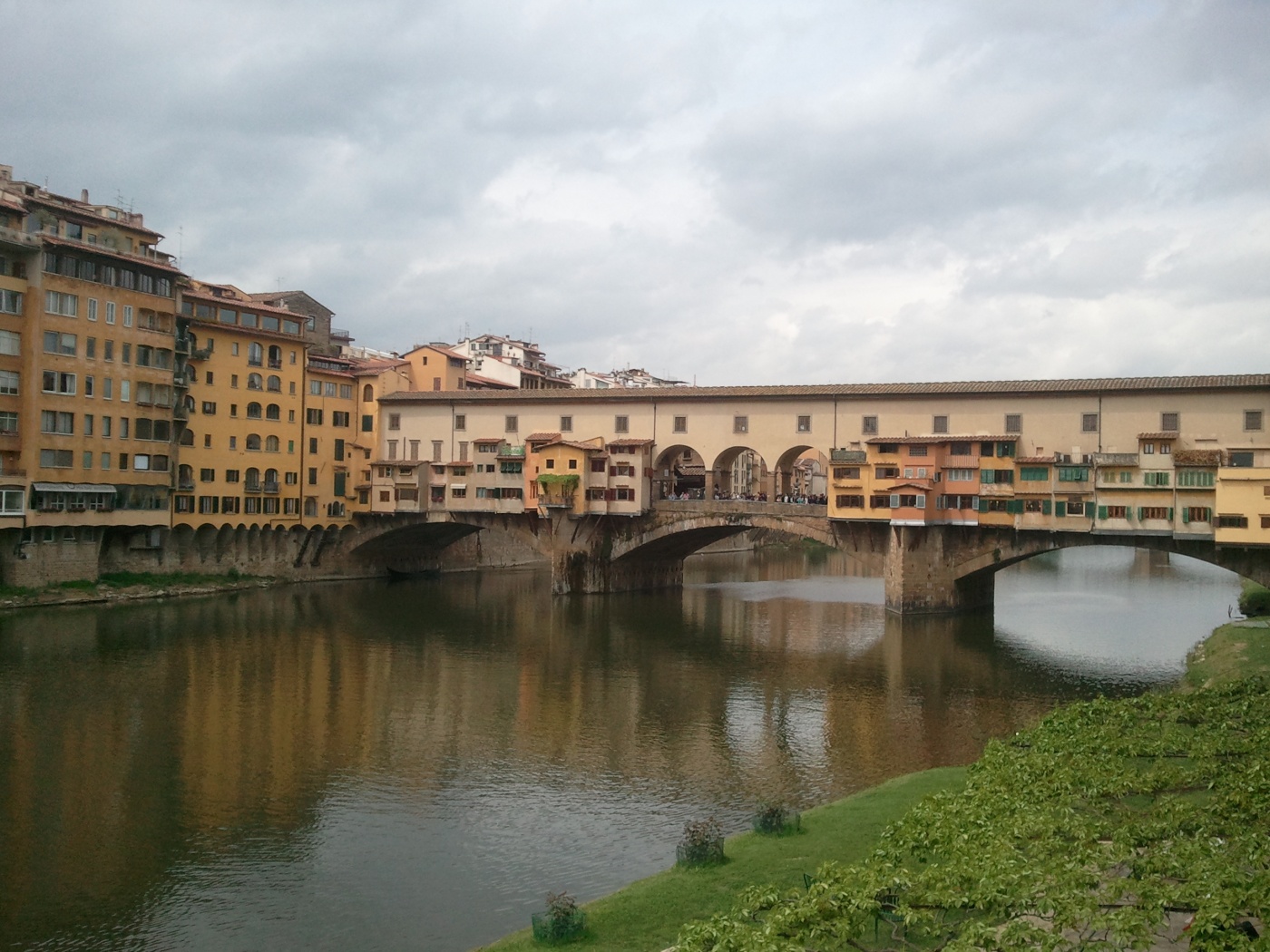 I like to say that leaving Rome went off without a hitch but this was not the case. We were up early, fed and showered with our packs on ready to leave when the door to our B n B wouldn’t open. We tried our keys. Nothing. The other guests tried their keys. Nothing. We called the lovely owner who was rather concerned and rushed right over. Within 20 minutes she had shouldered in from the hall and come to our rescue. Lucky! We then power walked to the subway and got to the train station with plenty of time to spare.

The bullet train was fast and relatively  comfortable and didn’t slow below 148kph the whole way to Florence. Once we departed we followed the instructions to our hotel. Our large room was decorated with antiques and artwork unlike the accommodation we are used to, yet the one thing that excited us both more than anything was a balcony overlooking the street with a table and chairs, perfect for dinner and a glass or four of red wine. 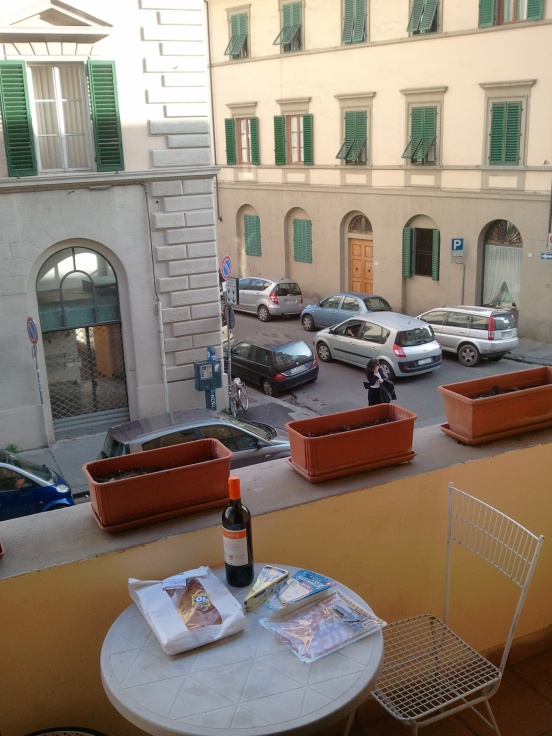 Now we hadn’t done much thinking or research on Florence, so unlike Rome we were rather oblivious to what it had to offer. What we found was striking architecture, narrow streets and lots of tourists.

For the most part we found we used our time in Florence to wander the narrow picturesque streets admiring sculptures and paintings that adorned the exterior of the buildings. 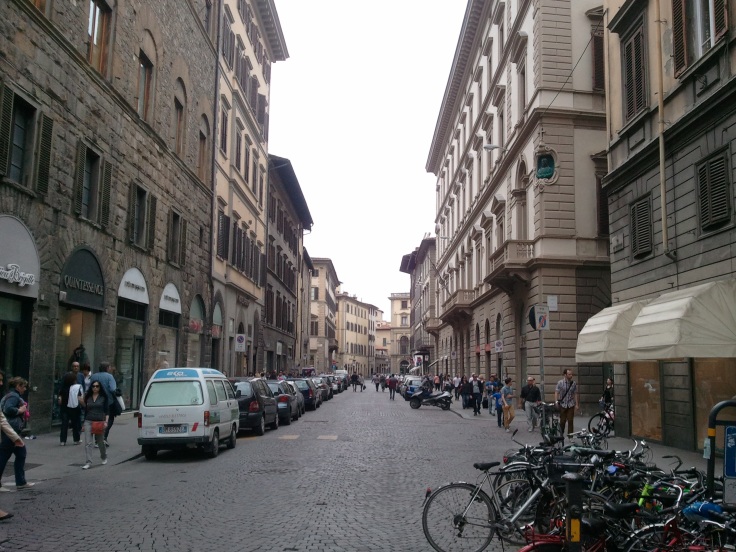 We sat in cafes eating all the things we didn’t know we were missing when we were in Asia. We ate lasagne, salad with lashings of balsamic vinegar, bruschetta topped with ripe tomatoes, pizza, fresh bread, salami, cheese, pesto and a bottle or five of red wine. 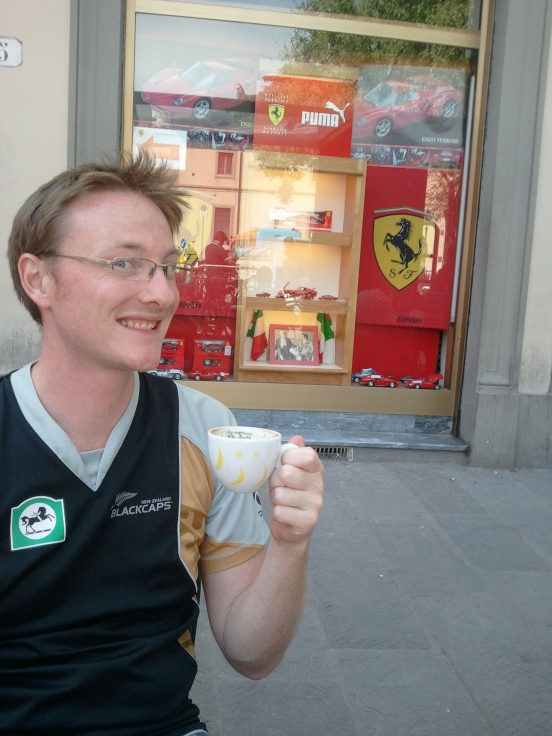 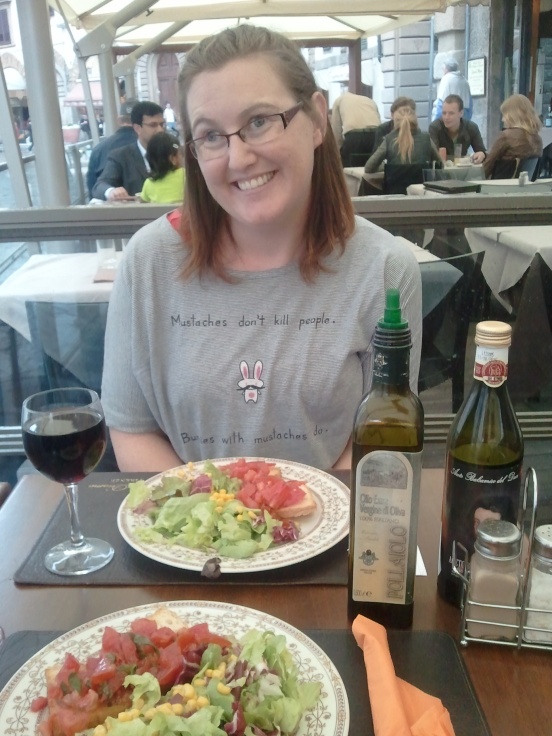 Now speaking of food we have found food here rather cheaper than we expected. The way we eat is not for everyone but it is a way of making you Euro stretch further. We often eat breakfast in our room (that is if it is not provided), we eat lunch at a cafe or restaurant and get a lunch special such as a pizza, bruschetta and wine for €7.50 or salad, bruschetta, pasta or lasagne  and a glass of wine €10. Then we pop to a local deli/ market or supermarket for a bottle of red (€2-4) and fresh bread  and other goodies for sandwiches for dinner.  Our splurge dinners form the supermarket are about €10 including a bottle of wine.

Ok, enough about food, we didn’t come to Italy for the food… Yes we did!

The best way to explore Florence is by foot, so we walked a lot and more often than not found ourselves stumbling across a museum, cathedral, famous building or area that we had intended to see. As there are so many places to visit in Florence and we were limited by time we explored the following and many more;

Cathedral di Santa Maria del Fiore.
A huge cathedral surrounded by a square. This cathedral was built in the 14th century and has a striking green and white marble exterior with ornately carved sculptures adorning the high walls. 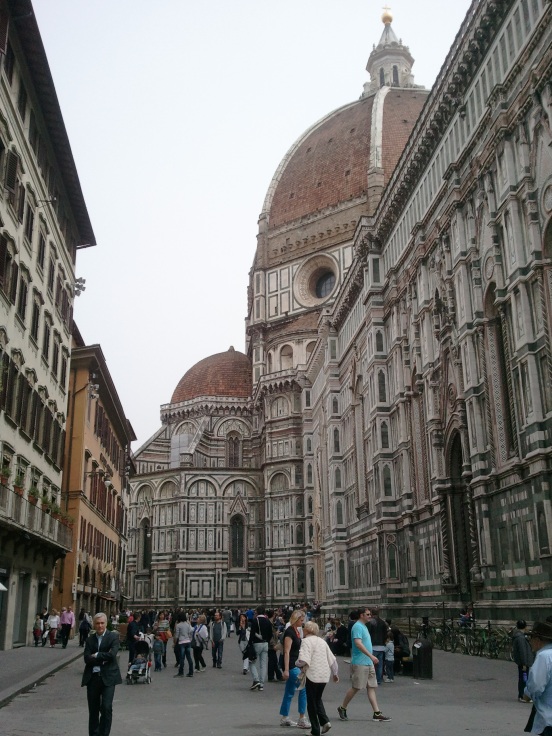 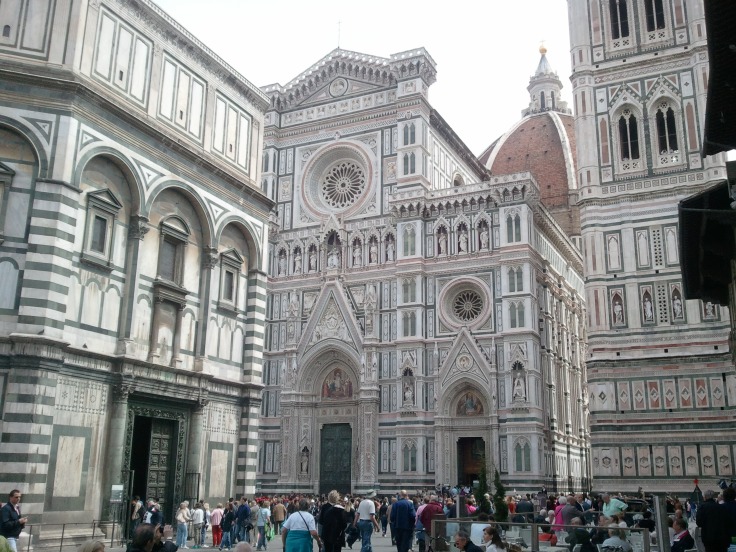 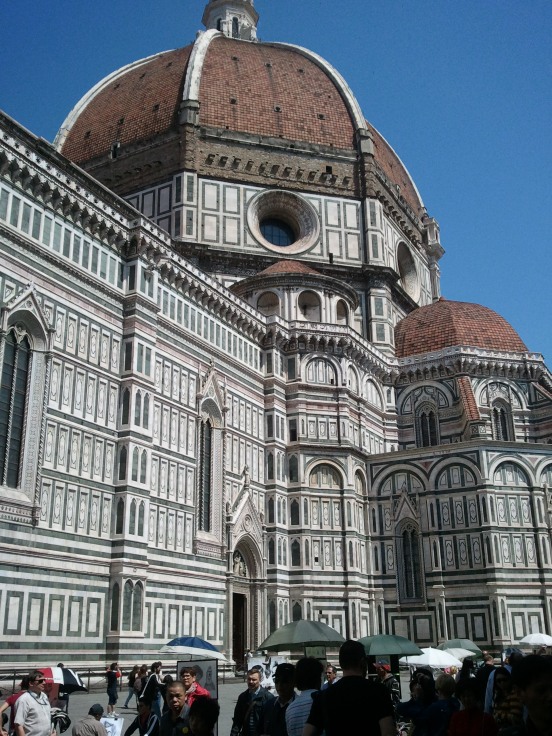 Michelangelo’s Piazza. On the far banks of the Fiume Arno (river) you climb up a series of steep stairs to an amazing 180 degree view of Florence. What a view it is from the lush hillsides to the terracotta roofs of the city with cathedrals, churches and monuments piercing the skyline. From the viewpoint we walked up to the a church decorated in the same style as the cathedral, the interior in covered in detailed frescoes. There is a legend that the local priest was killed by the then Roman emporer, and afterwards picked up his head and strolled back to the church . His remains are said to be buried in the church. 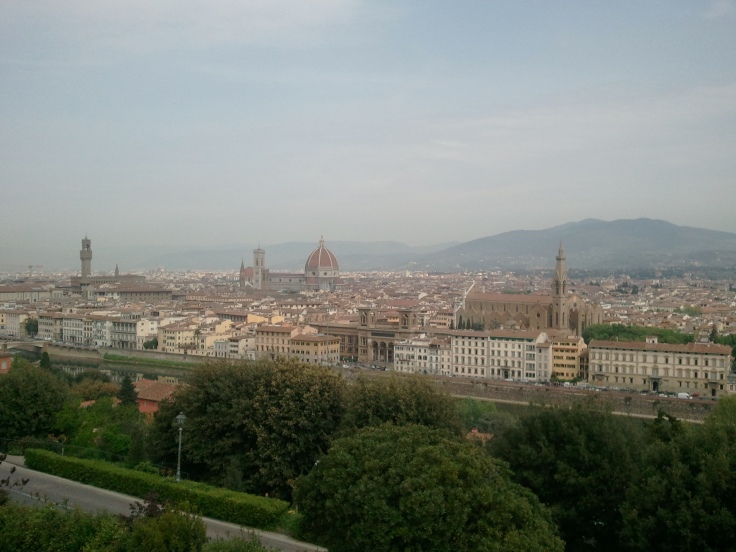 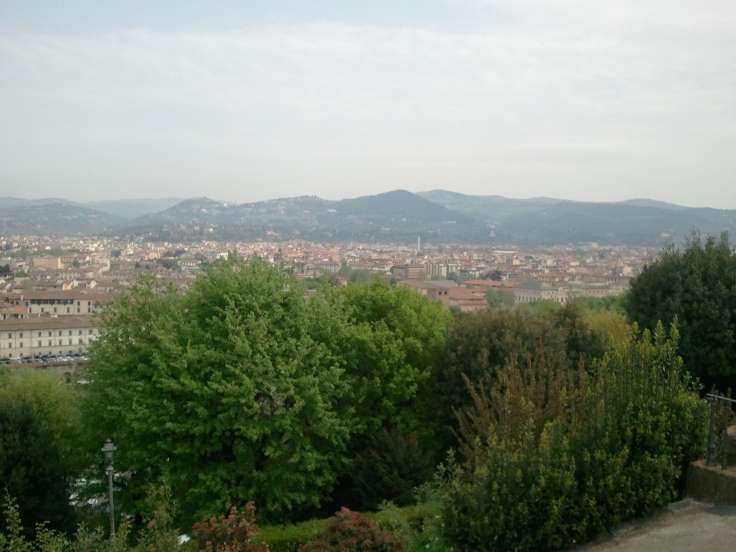 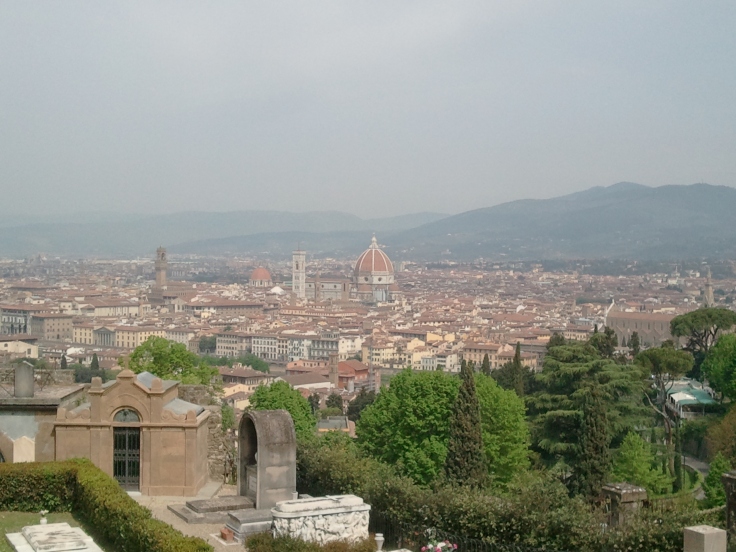 Ponte Vecchio
The bridge is the last remaining of the original bridges crossing the river, and unlike the modern bridges has shops on both sides, most of which are jewellery shops. The centre of the bridge is open to provide an amazing view both up and down the river. 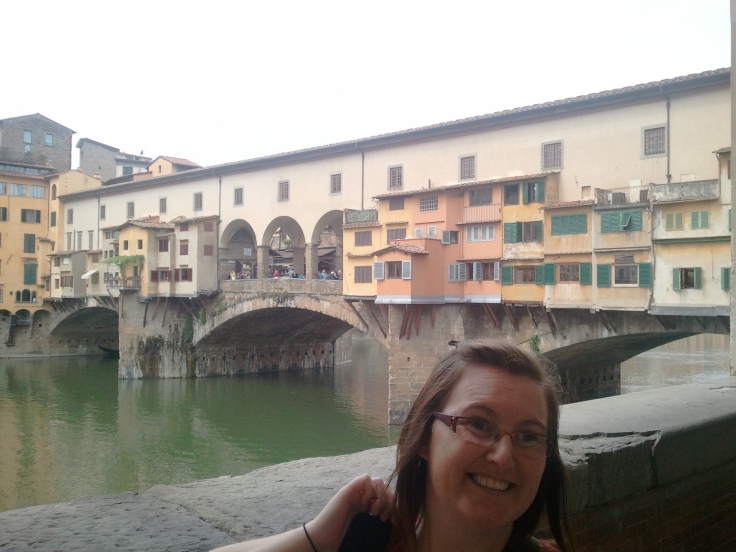 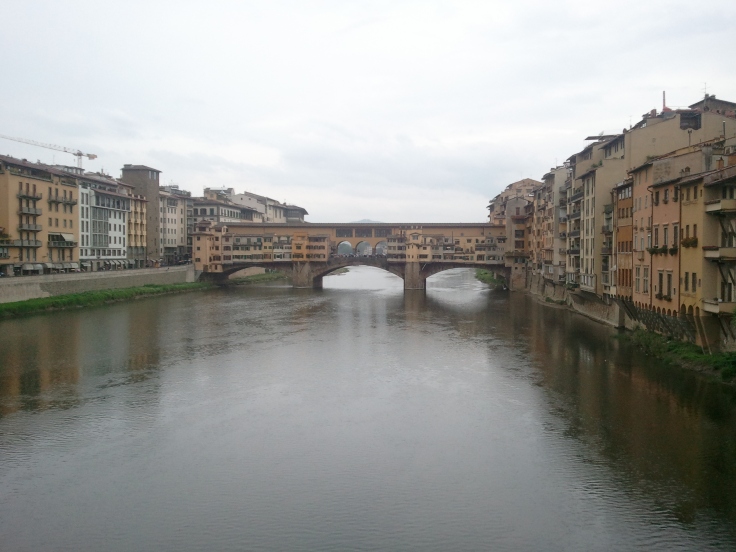 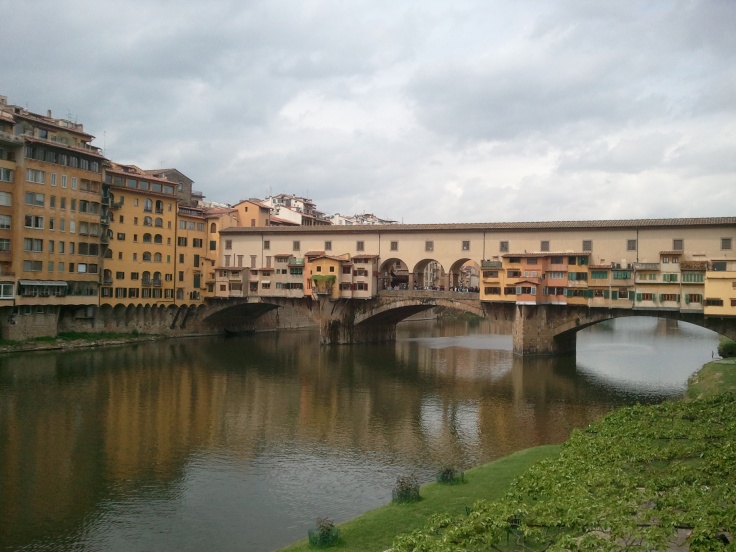 Palazzo Pitti
The palace and surrounding gardens now are open to tourists to view. For a hefty €13 you can view an amazing collection of renaissance  art by the greats… Too many to mention. The apartments and a modern art exhibition (not modern as we know but maybe 14-16th century). Unfortunately it decided to rain so we were persuaded not to pay the €10 to visit the expansive gardens.

Cathedral with the fake David
Situated in a square with over a dozen larger than life statues this former church now houses the Uffizi museum. You can view the detailed frescoes in the foyer for free. 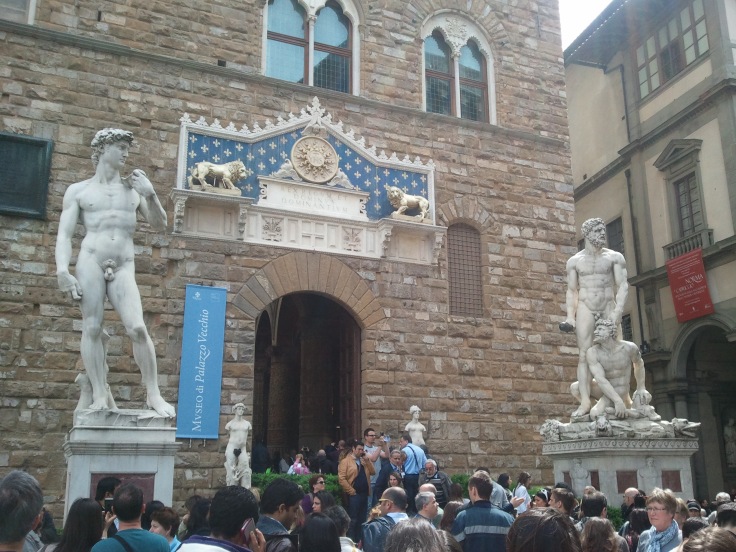 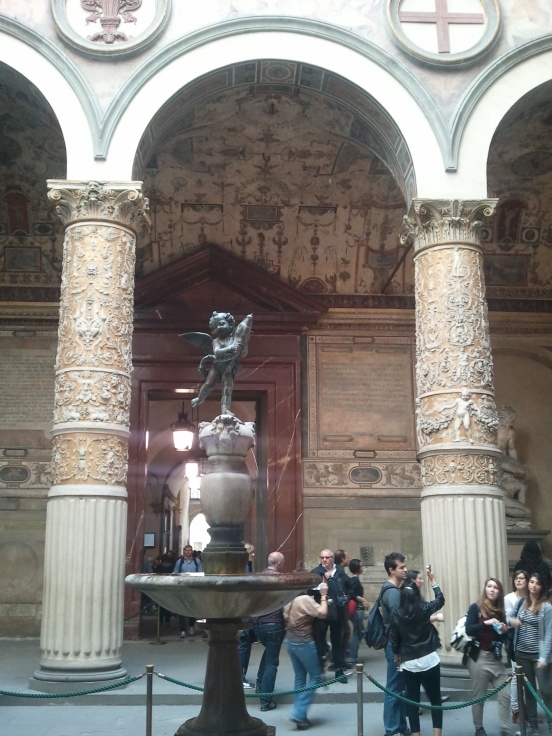 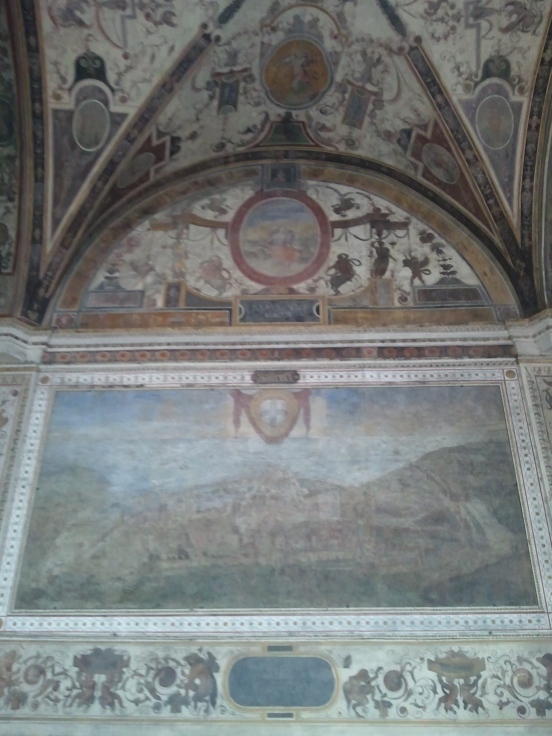 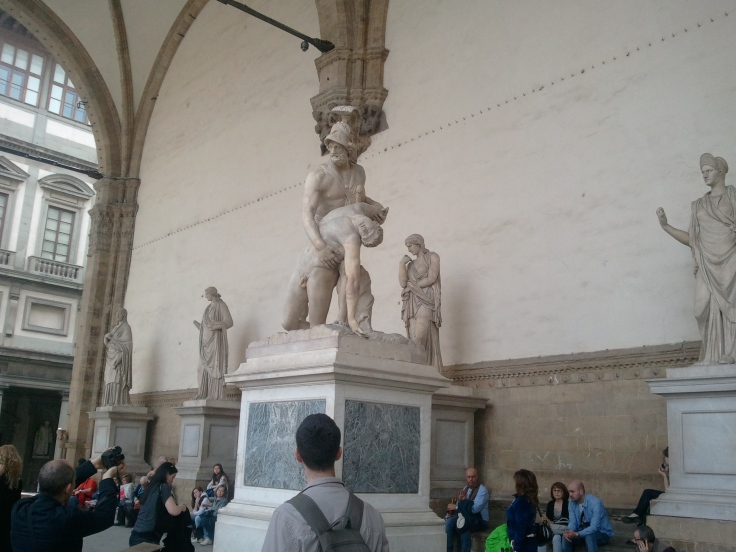 We admired many other famous and not so famous buildings and happily strolled through the truly idilic Italian streets.

Unfortunately we didn’t get to see Michelangelo’s David as it was booked out months in advance and we were put off by the queue for those who had not booked  that snailed  around the corner.

Our overall impression of Florence was that it was very arty with various galleries and many would love it (our parents included) but it was too busy with way too many tourists for us… Not saying we hated it just that others would appreciate it a lot more than us. (Will especially has a reserved hatred for paintings that saw him nearly run through the gallery rooms in the Palace.)

Next stop Rimini and San Marino!