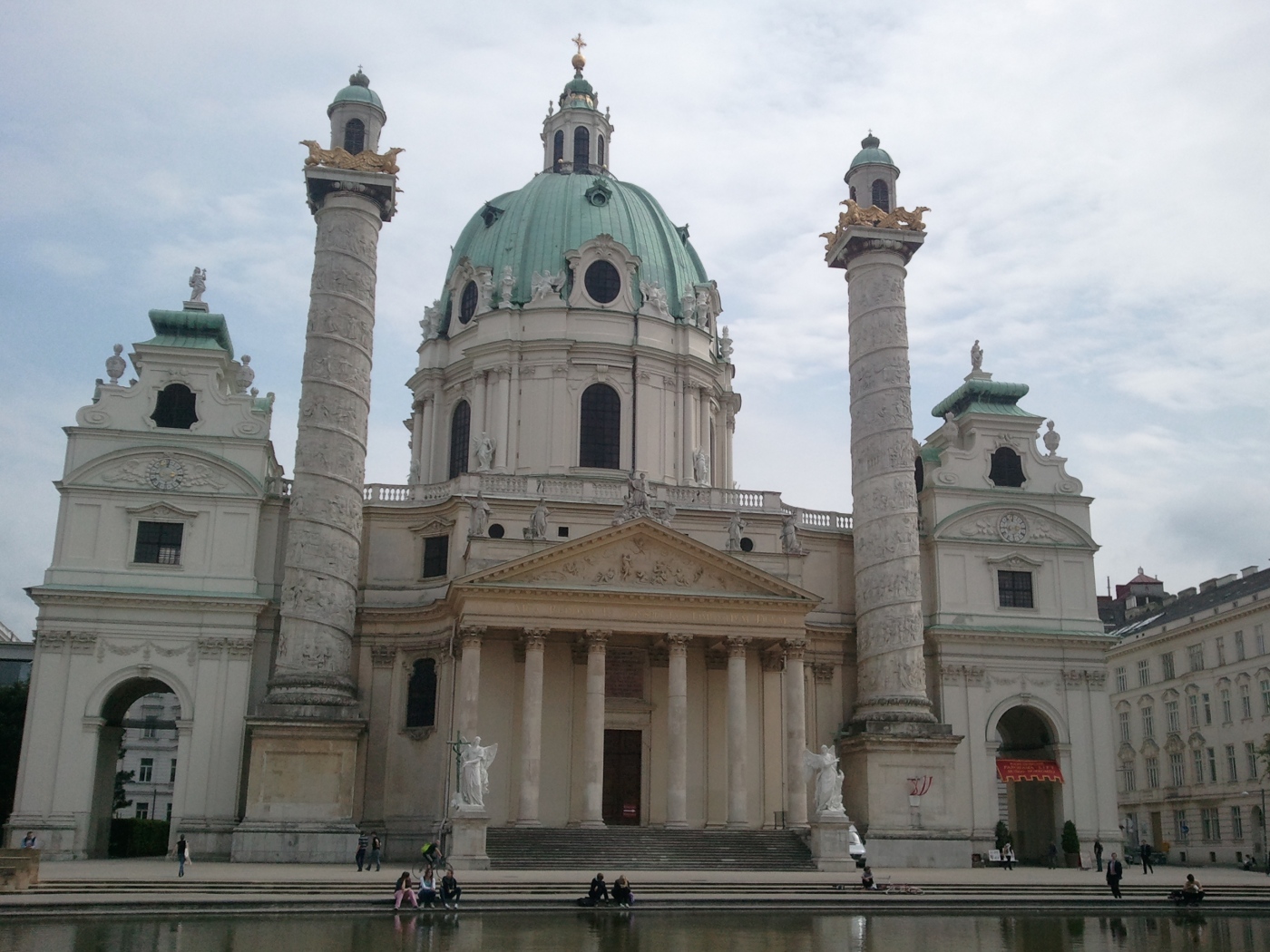 To get from Venice to Vienna meant taking a bus to a town just across the border in Austria followed by a train. The scenery from the bus as it wound its way through the mountains in northern Italy was stunning. Valleys with azure blue rivers, snow capped mountains, villages dotted along the slopes, and ski fields with their equipment appearing frozen in time waiting for the next seasons snow.

If you have been reading our blog much, you may by now know about our deep seeded hatred of buses. This one did nothing to change that feeling. As the bus and train were operated by 2 different companies – the bus by the Italian train company, the train by the Austrian train company – we had a reservation for the train leg of the journey but couldn’t buy tickets until we got to the station. The bus had left late, and arrived late to the station. We had 7 minutes to get our bags, buy tickets and get on the train. Sam ran in to get the tickets while Will waited around idiots for his bags to be dropped off by the driver. Tickets in hand and bags collected we ran to the platform and jumped on the train just as the doors-closing alarm started sounding.

The rest of the trip gave further stunning views of the countryside but with a distinct Austrian twist. Houses were very colourful, the streets and layouts seemed more…orderly, and the cars had become dominated by the German marques.

After arriving in Vienna we spent another hour trying to figure out the impossible transit system and trying to find our hostel. At 7pm we eventually did, checking in and then grabbing a kebab from down the road for dinner.

The day had highlighted 3 key differences about travelling in Europe over Asia:
– Everyone speaks English in Europe. Literally. I am writing this from Germany now, and everyone we have met and everyone we have asked a question on the street in our first month here has spoken English. In Korea especially, you wouldn’t even try to ask anyone anything!
– Travelling in Europe, even with the issues of the day, is so easy after South-East Asia. Pretty obvious I know, and especially in Asia the transport is part of the experience! But still interesting how it is worlds apart.
– Europe has the same closing times as New Zealand. We are so used to things being open until very late in Asia, which is great for travelling and arriving late to a destination. Having things close at 6pm, supermarkets and most shops not open on Sundays, and even a lot of restaurants closing by 7pm will take some getting used to.

Perhaps I should actually write about Vienna now…

Austria had been largely overshadowed in our plans by Italy and Germany, so we had done no looking into what Vienna had to offer at all. So on the first day (we only had 2 days) we decided to go to the city centre and just see what the vibe was. Upon exiting the subway station (using just the subway instead of the train/tram/bus part of the integrated transport system was pretty straightforward) we were greeted by the sight of the grand 12th century St. Stephan’s Cathedral. Surrounding the cathedral was a square (well, more like a circle) lined with 5-6 story buildings. Each building seemed to have been built between the 17th-19th centuries and all featured beautiful facades with lots of detail and decoration. 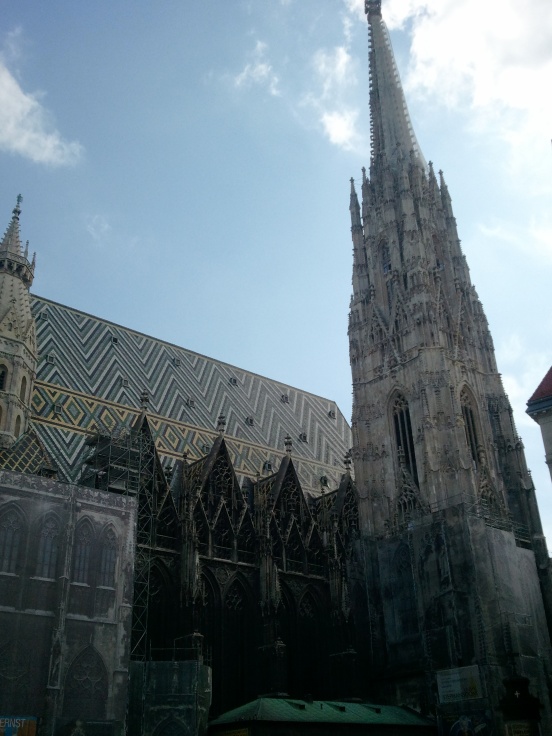 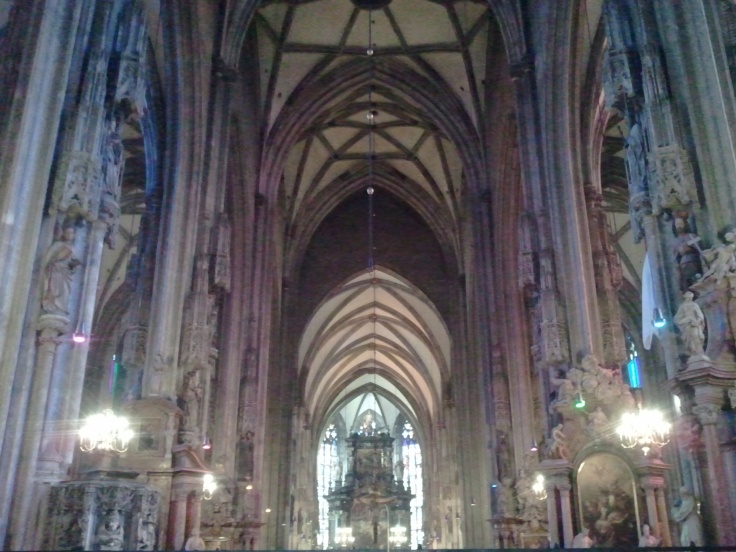 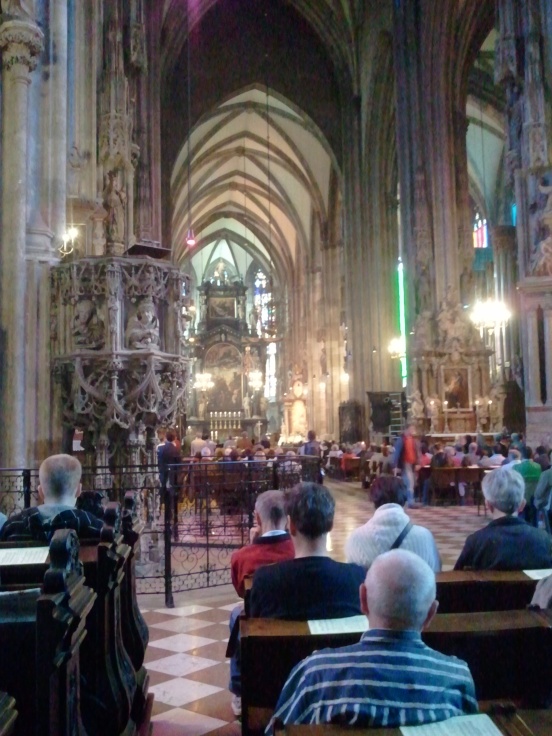 We stopped for a (stupidly expensive) coffee in the square so we could check a map and get our bearings. As we sipped our weak (compared to Italian) coffee we watched several men and women dressed in historical clothing, complete with white wigs, handing out fliers. We decided to get one to see what they were. Each one was from a different concert company and they were advertising their particular performances be it opera, philharmonic orchestra, or some dude on a piano.

After our coffee we decided to have a look into Steffi. As it was Sunday there was service going on so we just had a quick look. It was huge, and – even though I have already used all of these superlatives so far in this post, I have no choice but to reuse them – the attention to detail, decorations, architecture, paintings, stained glass windows were all stunning. (I could have said “the stuff inside was big and it was all choice”, but that really doesn’t do it justice.)

After we left we explored the city. We kept stumbling across grand cathedrals, dozens more of the similarily constructed buildings as we saw in the square, fountains, and in general just stumbling on the cobblestone streets. We can certainly see why the city centre is a UNESCO heritage site. It seems unchanged since Motzart was composing. Speaking of which, we saw the outside of his house in Vienna which was just a normal house. There was a museum inside, advertisements for a concert in his old piano room, and a few tourists outside, but other than that nothing special. 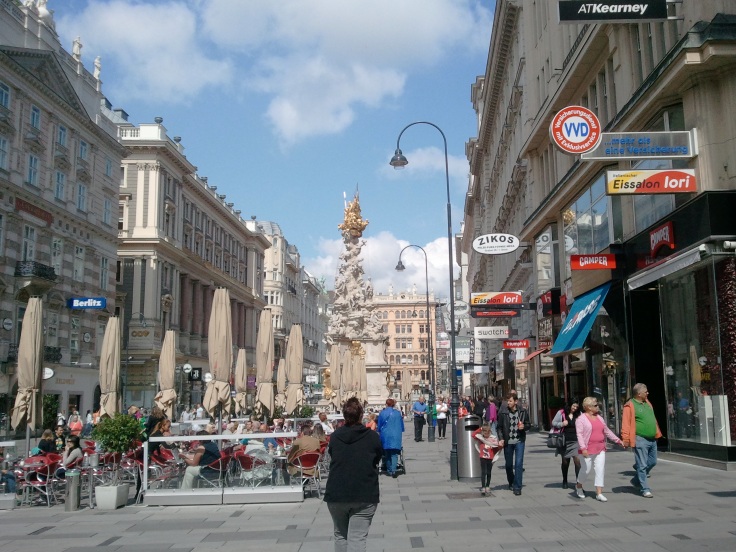 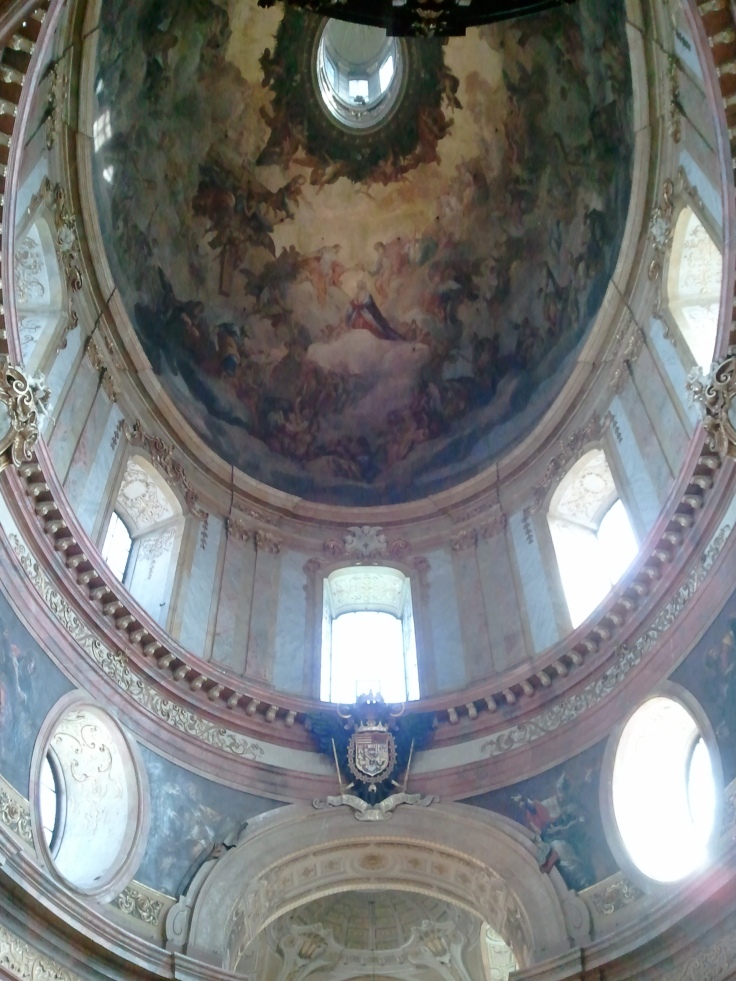 Around the streets by his house were some examples of Vienna’s distinctly arty nature. Several of the lamp posts had knitted covers, and small mirrors dotted along building walls had various pictures of hair styles, hats and facial hair so you could stop and see your reflection…except now you had a moustache. Or a Charlie Chaplin hat. Or a mohawk.

After lunch, which consisted of 2 of the best Salmon bagels known to man, we stumbled across a poster. This poster turned Sam from a mature adult (which is debatable, but let’s pretend) to an excited kid. It was for an exhibition at one of the local art galleries of works by Friedensreich Hundertwasser, Sam’s favourite artist and architect.

With next days plan now in place, and armed with the knowledge that this was Hundertwasser’s home, our new mission for the afternoon was to find Hundertwasser’s Village. We found it after about an hours stroll to and along the river, which included a man made beach area for sunbathing. As you do.

Hundertwasserhaus is a very quirky apartment complex. To see it up close gave such a different appreciation than you get from pictures. There wasn’t a straight line in sight, and the quirky architecture was very unique. We spent about an hour looking around before heading to a local park to unwind for a while before walking the 5km back to the hostel. 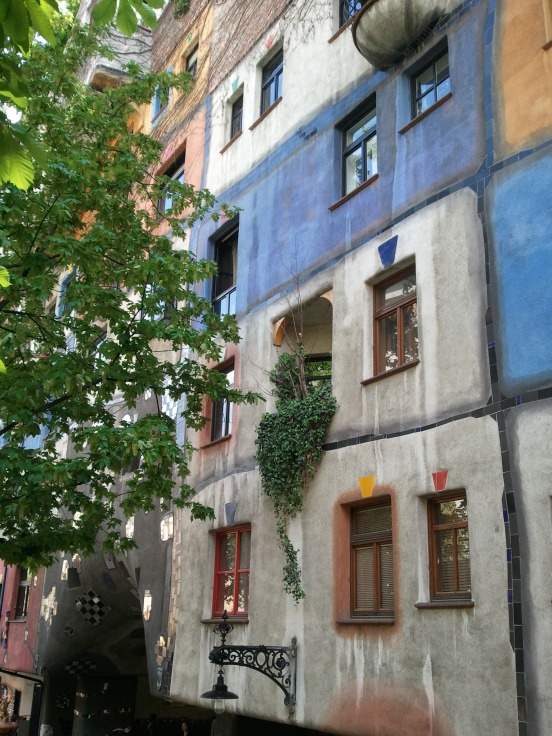 The next day we went to the Belvedere, an old palace complex dating back to the 17th century and featuring palaces, horse stables and immaculately presented gardens. However we were here mainly to see the Hundertwasser exhibition. Upon perusing the paintings on display we were quite interested at some of the similarities we had to him. He had lived in Japan and, like we had even from our short trip there 2 years ago, become captivated with the culture. After his trip he had returned via the Trans Siberian railway and stopped in Moscow for a couple of days. Sound familiar? Seeing several photos of him in places we had been to, albeit 60 years after him, was pretty cool.

In the afternoon we wandered around the suburbs, soaking in the surroundings of the ‘real’ Vienna outside of the historical centre. One surprise was the Turkish and Polish population and shops being far larger in number than we expected. Which meant delicious kebabs!

2 full days wasn’t quite enough unfortunately, but was enough to give us a good appreciation of the city. Steeped in history, and with some stunning architecture, it was the most “European” place we had been to so far. Quite a contrast to the Italian cities with its different designs, and lack of graffiti.