A big part of the adventure in a new country is getting there, and in that regard Chennai didn’t disappoint. We had booked flights from Kathmandu with a stop in Delhi, and were concerned that we would not make the transit from international to domestic in time. This was due to a number of reasons, the first of which being that we only had one hour between flights. The second was that on reading through others’ experiences on the internet many had said you need at least one hour to get through customs. With that knowledge we emailed Air India and got a rather cryptic reply of “connecting be less.” What? We were about to change our flights, but decided to go to the airport and talk to a real person. The response was  not to worry, Air India will get you there, do not worry. Cool so now we could relax… 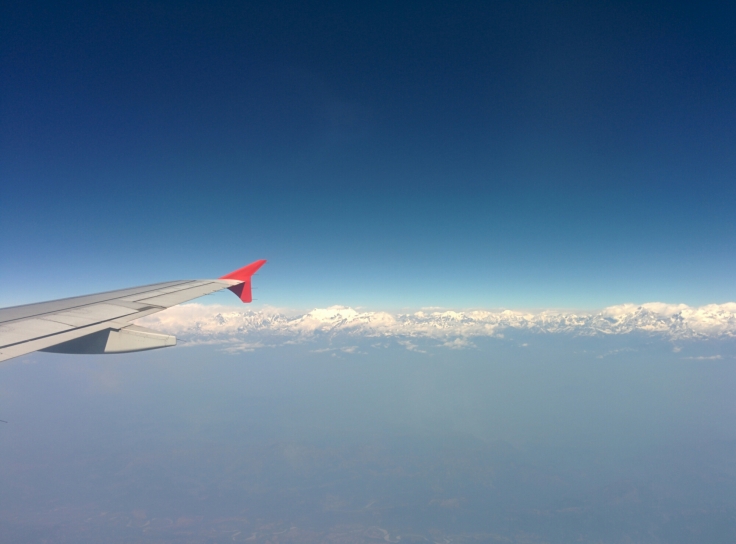 Our first flight was fine but when we got to Delhi to transfer we ran to the transfer queue and stopped dead. Five planes had landed at the same time and most of the passengers were transiting through. The security was incredibly slow and funneled us from one queue to another in a giant maze of ropes and tape, women went one way and men another. We asked any staff we could find if our flight had left, and if they could rush us through with the other passengers who were being rushed through whose flights were due to leave. But to no avail. After a thorough pat down and over an hour and a half we were set free from the maze.

There was no use in running as our flight had well and truly left. Unsure of what to do we made our way to the gate and found an Air India staff member and asked what to do. Today was our lucky day as we seem to have asked a manager and were asked bluntly “where have you been, did you not hear our staff member call for you?” Our response, the truth that no one had called us, was met with a rolling of her eyes and a muttering under her breath of “unbelievable!” (aimed at her staff not us.) The next moment her phone was out and harsh words were yelled into it, followed by a “come here now!” Within ten minutes we were escorted back down to the now empty maze and asked to sit and wait, with two rather tired looking Italians who had also missed the Chennai flight.

After a long wait, complete with a free meal  we were finally ready to go. On reaching Chennai we had more queuing to contend with. As we had applied for tourist visas online (TVOA), we had to find the correct counters to get them processed. After Sam was escorted into an office, we were led to a huge new TVOA area – the new visa rules that had come into effect the day before  meant that visas on arrival will only be granted to those who have applied and paid online first. We were the first to use the system in Chennai, and had 3 of the happiest men trying to figure out the system with us. But we got through it, with Will helping set up the fingerprint scanner for them in the process.

On exiting the airport we paid for a prepaid taxi, negotiated from 900Rs down to 400Rs and had an amazing ride in an old school taxi. As we ended up arriving so late we enjoyed a much needed shower before having an early night.

On our first proper day in India we walked, and walked, and walked.  We explored the area around our hotel and were amazed at the spectacular colours and sounds. It seems that people are not scared to wear or paint their houses the brightest colours imaginable.

We explored further afield after stopping for a cheap local coffee. Our wandering did however have a purpose as we wished to visit two temples located close to our hotel. Upon finding the first temple we were suddenly immersed in a huge festival with the streets closed to traffic by the police. Thousands of people were packed into the streets surrounding the temple – the busy throng of people creating yet another explosion of colour to overwhelm our senses. The streets were lined with stalls offering food and flowers, books and crockery, and there was even a stall selling brightly coloured pottery that was arranged in one giant heap. 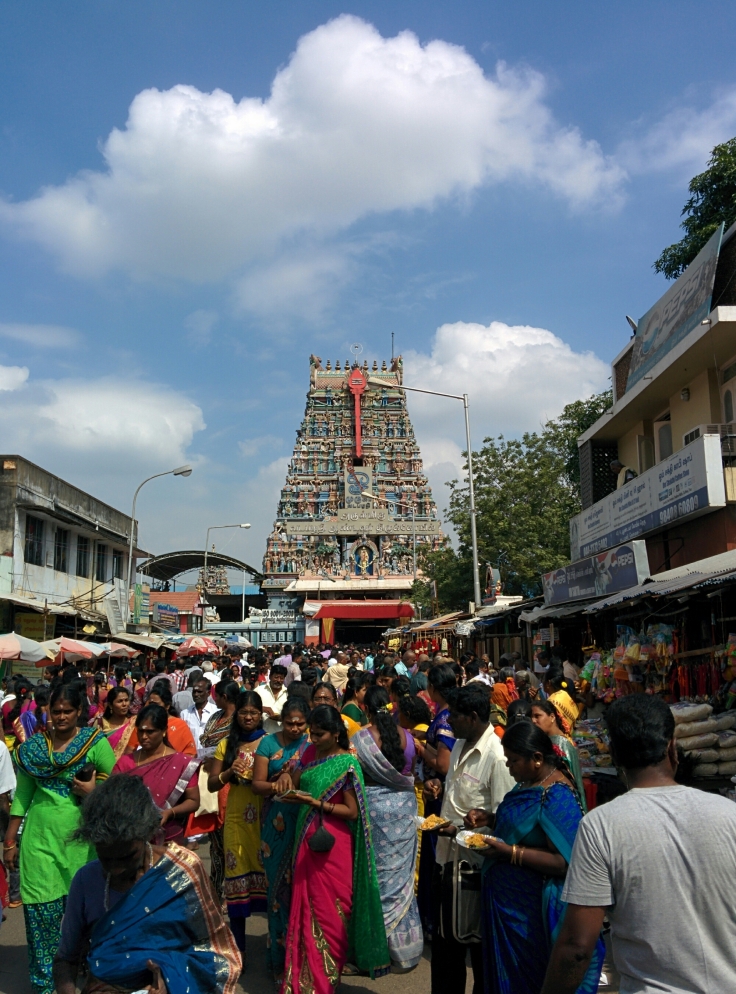 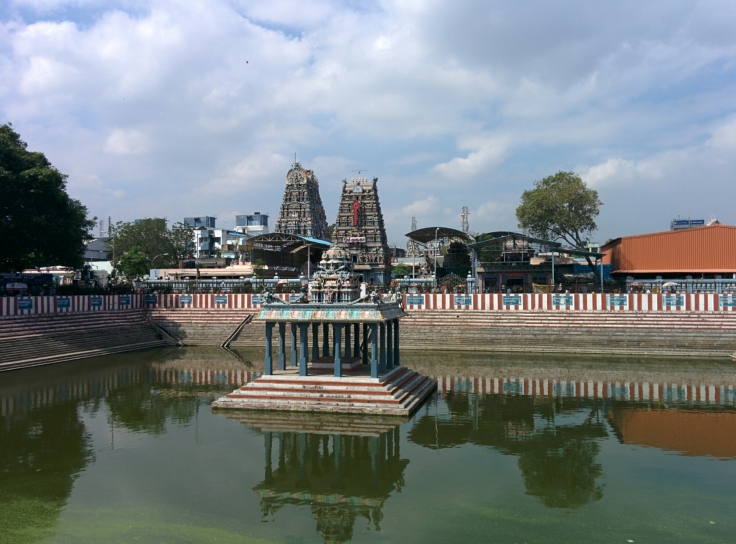 We continued on out of the chaos to find some lunch at a local eatery. Biriyani was the food of choice, consisting of spicy fried rice with chicken pieces and a hard boiled egg buried into it. Delish!

After our feast we took the long way back to the hotel, past the second temple which we admired from afar. We had a much needed cool off in our room before heading to Anna Neghra Park for some peace and quiet. The park was stunning and a sea of quiet in the noisy city. At the centre of the park was a rather unusual viewing tower with a spiral ramp spiraling around it all the way to the top. Unfortunately the tower has been closed off to visitors due to too many people ending their lives from the top.

We returned to our room with a feast of street food, bakery items, and random supermarket finds and relaxed to enjoy some cricket and mind numbing movies on TV. It was so nice to have power and TV again!

On our second day we got a taxi to the centre of town and took a brief look at the “beach” (renowned as being one of India’s dirtiest beaches), yet another temple, the lighthouse and surrounding streets. Although pleasant the area lacked the charm of the urban neighbourhood we were staying in. Our tuktuk back to our area provided an interesting time as we found we had to be rather hard nosed as we had negotiated a price and our driver was trying to make some extra money off us by stopping off at “friends” stores and encouraging us to go in….hell no! 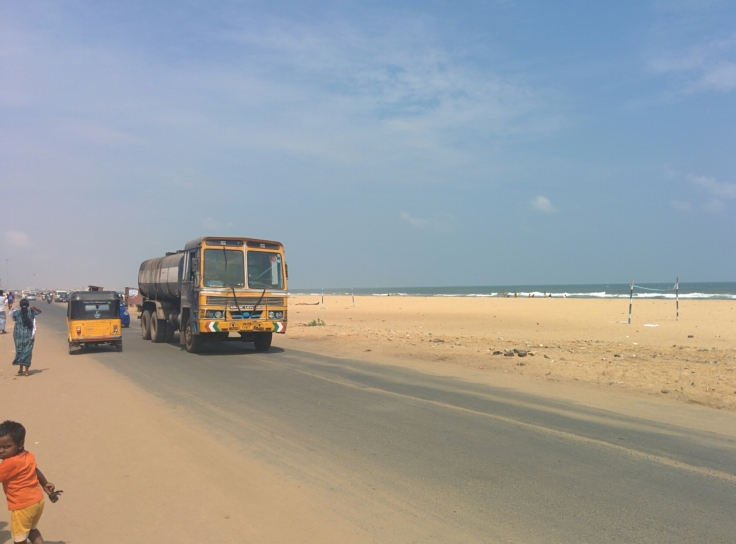 Two days in India is hardly any time at all and not enough to judge such a huge country. But overall it was fascinating, colourful and surprising – especially how it was cleaner than Nepal! Our first impressions have planted a seed in our travelling brains, and we will definitely be back.