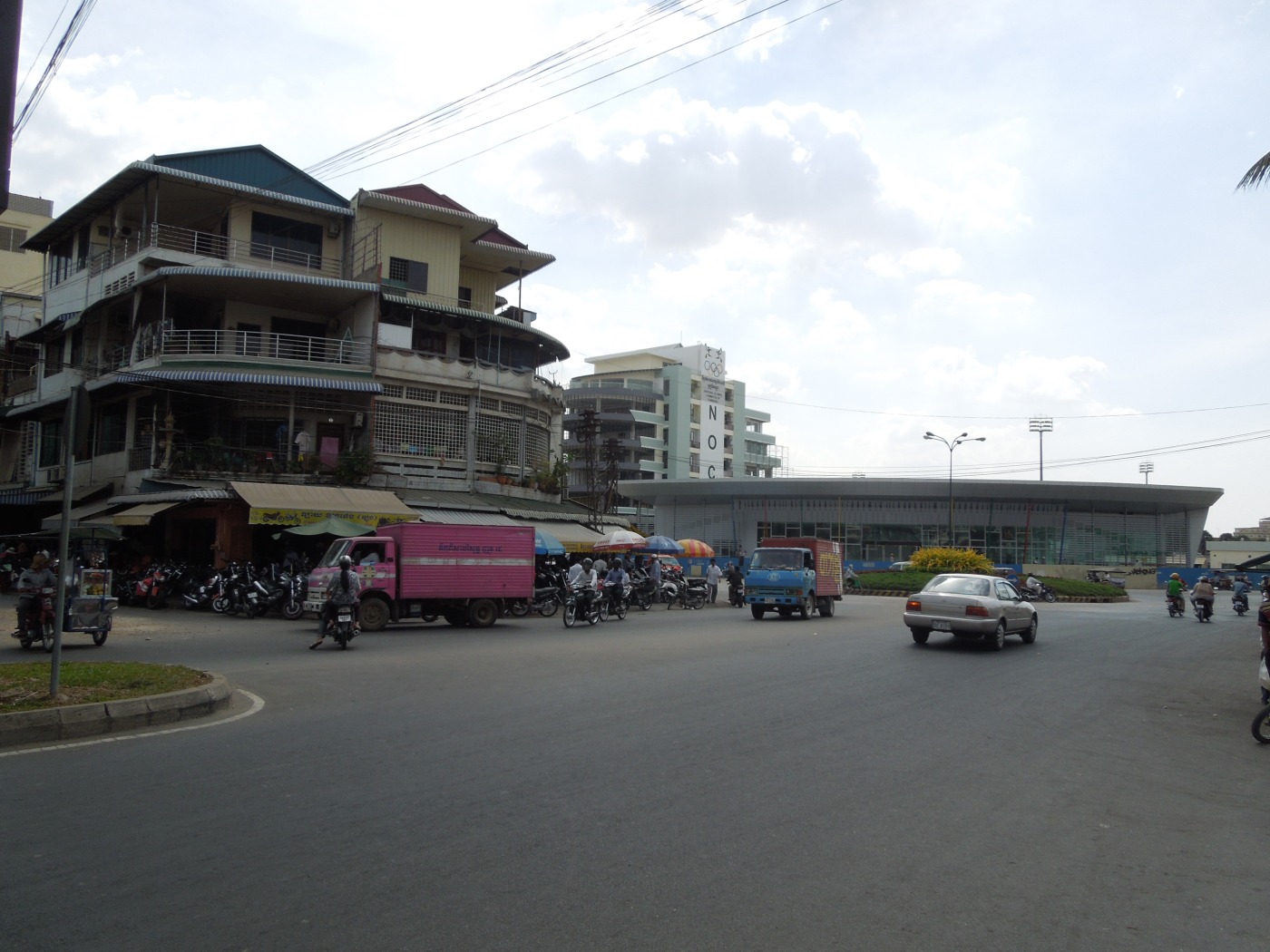 After spending weeks in small towns we were rather exited by the possibilities that Phnom Penh offered. We needed a big bustling city and finally we got it.

The bus from Kratie was basic but more than adequate and dropped us within a few K’s walk of our hotel. Yes, I said hotel, for once we were splurging on a hotel $15 a night got us an room in aptly named Smiley hotel. Once we were checked in and had a much needed shower we set off to explore.

We spent several days exploring the sights of the capital. We walked through the bustling streets teaming with tuktuks and scooters dotted with the occasional car or truck full of people. As we have often observed in Cambodia the number of people your vehicle can hold is only limited by your imagination. This also is true of scooters and tuktuks as we saw many strange and truly ridiculous acts as people attempted to move large and bulky objects on these small motorbikes, case in point a queen size mattress!

One important part of being in Phnom Penh was to get a visa for Russia. We spent one morning laughing in frustration as we were directed first one way then another and then back by helpful security guards and military personal until almost an hour later we found the entry to the Russian embassy. We asked a few important questions and left happy in the idea we would return in a week with all the paperwork needed and receive a visa for the TransSiberian.

We wandered along the wide park like streets admiring the silver palace (from the road) and glimpsed again at our ever present friend the Mekong.

We spent an afternoon exploring the ancient treasures in the museum and admiring the countries history.

We spent a lot of time wandering the streets enjoying the sights and admiring the driving madness of the traffic, exploring the madness of the markets and finding treats in the international section of the supermarket.

After a few days we sketched out our plans. – see decisions.

After another bus trip we cheated and got a tuktuk back to our hotel. Today was Sam’s birthday and we felt after our disappointment over the Vietnam visa shambles we deserved a treat. We headed to the supermarket and filled a few bags with treats including a chocolate fudge cake to enjoy in our room.

With cake in our bellies the next morning we headed back to the Russian embassy, this time finding it easily. We entered confidently and produced all the documents we were told we needed. Within five minutes we left disappointed, the answer was “no” we can’t issue the visa for you here. We left frustrated but still determined not to waste the day so headed to the China embassy to gather the documents needed to get our Chinese visas. We wandered back and began to gather the evidence needed to backup our application.

The next morning having spent hours filling in forms and booking accommodation we were ready to apply. We arrived as the gates opened and entered confidently. Yet again we were told “no” you can’t get the visa here because you are not going directly from Cambodia. OMG!!!! We give up! We left the embassy frustrated.

Over a few beers we made some important decisions.
1) We would go to Vietnam the next day and use the visa that we had.
2) We were going to go to Hong Kong for a few days after Vietnam to sort out visas.
3) We were sick of wasting time on visas.