Another overnight sleeper train, this time 24 hours. I think we might be getting used to them as we are getting more and more relaxed about getting to the train. After discovering the lack of coffee available onboard last time we took drastic action and bought our own coffee and plastic mugs for this trip.  We also purchased some just add hot water meals (curry and rice and good old Maggie mashed potato in a cup). Our cabin mates for this leg were two independent males who didn’t even say hi, oh well. Better than loud mouths! 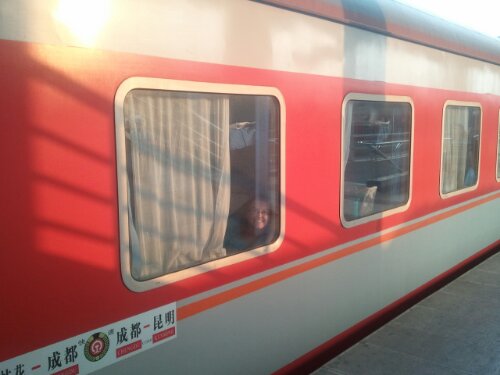 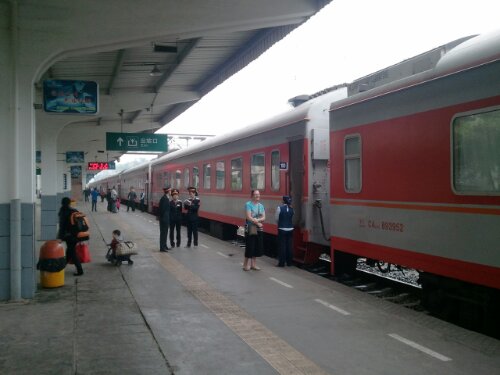 We arrived into Chengdu station and followed the hoards to the subway station. Well if the queues are anything to go by the locals have latched onto the new subway system.  With ease we negotiated the subway and followed our instructions until we arrived at our hostel. The hostel located right in the middle of the shopping district has so many rooms but provided all the basics.

After a quick shower we grabbed our map and headed for some food, oh god! We were hungry and it was busy so Will just pointed at a picture on the Deco’s menus and emerged with a huge bucket of chicken and burgers with a few soft drinks to wash it all down. Not wasting a mouthful we rolled out of the restaurant feeling decidedly  fatter, tomorrow we must start a new diet! With that thought in mind we started exploring the open air shopping mall in Chunxi. There were thousands of people milling about and it had a really great vibe. After getting turned around a few times we attempted to head back to our hostel and hit the hay. 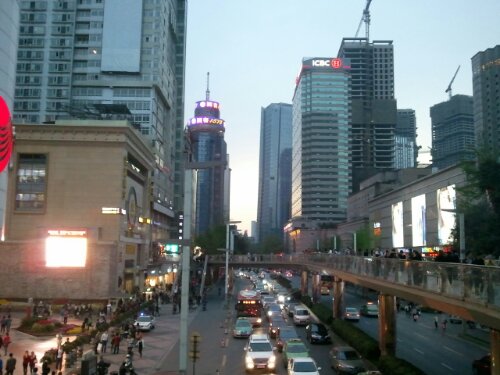 We woke early and headed off to explore the city, only realizing once on the subway that we had left the map on the bed, bugger!

Our first stop was the Wenshu monastery. After a few wrong starts (and after later finding out the English signs had the  wrong name) we found it. Wow what a beautiful area, the buildings and courtyards filled with incense and people made for a very “Chinese” feel. After spending much time exploring we headed just beyond the gate to a street aptly named “cultural experience street.” Each building and shop front was amazing, the streets were lined with wiry trees and red lanterns hung everywhere.

We spent much of the morning exploring the area and taking many photos. Will stopped to have a play on a basket ball machine and as he played a small crowd gathered around him :). 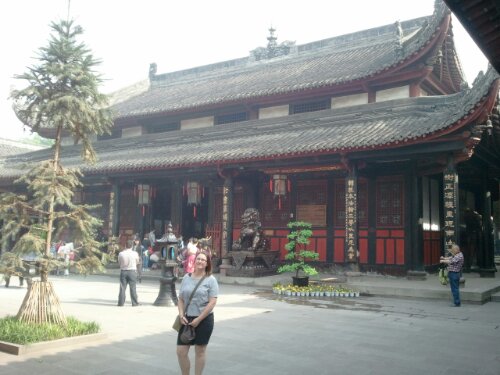 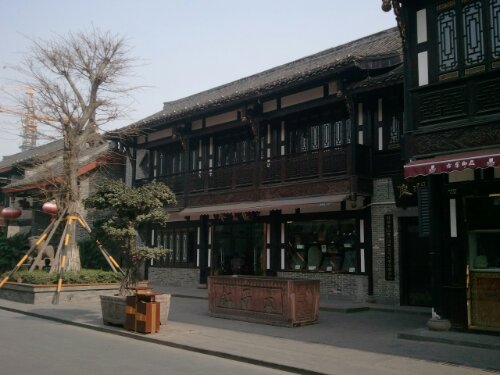 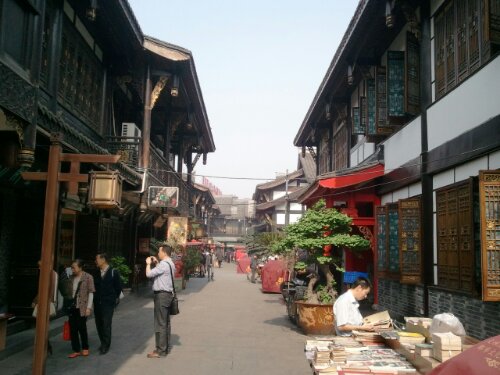 After we had exhausted all side streets we headed south until we found the statue of Mao and on cue the fountains started their daily dance. Time for a feed, today noodles for lunch.

Once fed we headed further south by foot and explored an area teaming with people and shops. The area, Jinli ancient street, was much like Christchurch’s art centre with streets of old buildings (or at least made to look old) with all sorts of food shops, crafts and restaurants. At two on a Sunday it was absolutely crazy so we decided to leave. On return to the hostel we settled down to do some Europe planning and Will needed to see what was happening in the F1 as always.

One of the main reasons we were in Changdu was to do a day trip to Leshan to see the giant Buddha. Now by giant I mean huge – at 71 meters the Buddha is the biggest Buddha in the world. The Buddha was built at the converging points of three main rivers. The thought behind it was it would protect the many boats and people that use the rivers.

Today it is a massive tourist attraction with thousands visiting daily.

To get there from Chengdu we took a local bus which takes less than 2.5 hours. Once in Leshan bus station we hopped on a local bus and arrived about half an hour later. The Buddha is in a world heritage site and for less than $20 you can access a wide range of temples within the complex. We took an easy stroll along the paths, noting the caves and carvings along the way, and on reaching the Buddha the first thing we saw was its head. As it is carved into the side of a cliff at the edge of the river you enter the site from above. As you descend the hundreds of steep stairs the shear size of the Buddha dawns on you. It is truly enormous. It takes some time to reach the bottom but well worth the effort. The magnificence of the carving and the size are truly amazing.

After spending a decent amount of time admiring the Buddhas toes we ascended through the cliffs to further explore the temples, gardens and fish ponds that are spread over the lush hillside.

A truly amazing place. My words and our pictures don’t do it justice.

The next morning we again woke early ready for a cute and cuddly day. Pandas! We headed off on the bus to see the giant panda research base just out of town. After taking over an hour and two buses to get there we arrived at the site. As with everywhere in China there were roadworks and construction everywhere so it took longer than necessary.

For little more than $10 NZ each we were free to explore a massive park. Most of the tours say the best time to see the pandas is early in the morning, so we arrived mid morning after most of the tour groups had left and avoided large crowds. We spotted our first panda lounging around eating his breakfast in his massive enclosure. The size of the enclosures is impressive and each holds only one or two pandas, very Orana Park like. 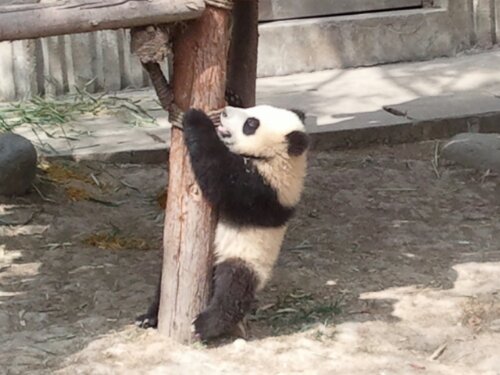 We spent almost three hours exploring the park and watching with excitement as we spotted yet another panda pandering about. The cutest was a mother and baby playing, I think both of us would have happily stayed there all day but our bellies started to rumble. We spent twenty minutes trying to find some kind of food and ended up settling for a sausage on a stick and a warm coke, oh well.

After a rather frustrating wait for busses we made a visit it Ikea, Sam’s favorite store (not like we even have a home to put anything in, but still fun to dream). We explored through the store, grabbed a feed and then ventured to the surrounding shops. A long day but a fun day much the same.