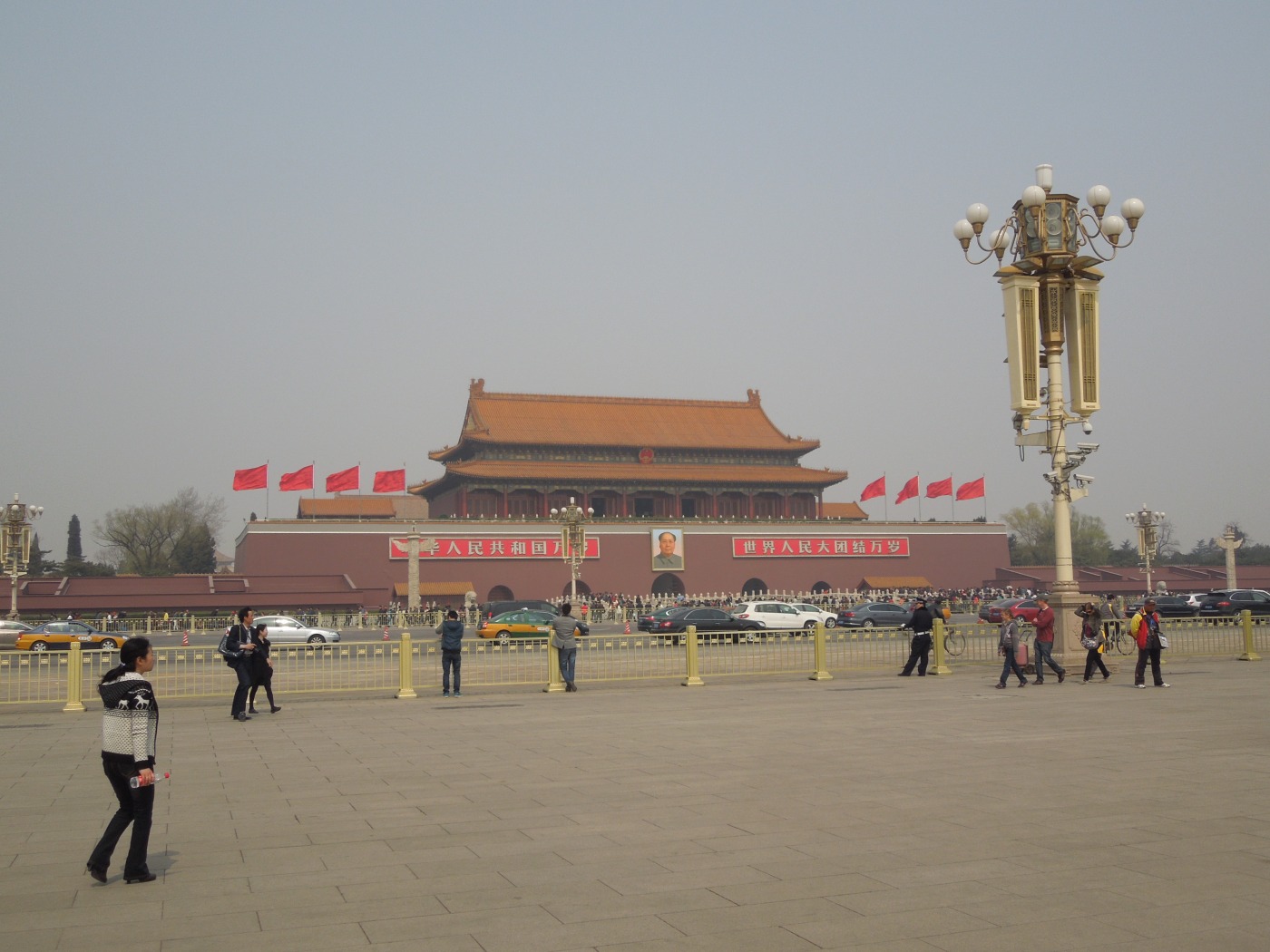 We were both excited, apprehensive and exhausted as we boarded the overnight sleeper train at Xian heading for Beijing. Excited, as we were on a newer train than our previous sleepers. Apprehensive, as we were just a little (well, massively) worried about getting our Trans Siberian tickets and the visas for Russia and Mongolia. Exhausted, due to the late departure of our train.

Well our excitement soon wore off. The sleeper train was a double decker and we had a lower cabin, this time sharing with two independent travelers, a woman in her late thirties and an older man, both Chinese. The first complication was there was no storage due to the fact the roof was much lower, which is quite bugger when you have two massive packs. Second neither of us could sit up on the lower bunk without hitting our head and there was no hope that Will would fit in the upper bunk due to there being a sloping ceiling which at its highest point was about two foot high. Talk about claustrophobic. The bunks were so close together that your shoulders brushed the sides as you walked through…And that was in first class! Oh well.

At about 10pm the man on the top bunk went to sleep and snored. Not just normal everyday snoring, oh no! This was snoring that would compete with a chainsaw for noise. After trying with earplugs, through which we could still hear him loudly, we gave up and both plugged in our music and turned it up full bore. My poor ears! In the end we got maybe four hours sleep and stumbled to our hostel rather tired.

After a quick shower and change, in a room more like a hotel than a hostel we headed off on our first mission: get train tickets. After walking up and down a street for twenty minutes we stopped to ask directions and were told “seventh floor” great! Within two minutes we were presented with our long anticipated “Trans Siberian tickets” Beijing to Moscow, departing in ten days.

Wow that was easy!

Day two, mission two: get Russian visas. We were very very worried about this one. In the end this was a piece of cake. We dropped in all the paperwork and paid at 10am and by 11:30 we had our visas.

Wow, that was easy!

On getting to the kiosk there was a lady selling the forms for about $2. We quickly filled out the forms and approached the window.  Now we had looked up on the Internet for what information we would need to supply and also times and costs and were fairly sure we knew our stuff. We got to the window, handed over our forms and asked for the express service. After a minute to check over our forms the man said ” go to bank, pay… Pick up tomorrow at between 4 and 5pm.”

Now this statement confused us both  as we knew it was a public holiday the next day. We asked the ladies and all the others floating about, “yes tomorrow, yes holiday”. Oh god! We walked along the road to the bank to pay. On entering the bank the customer service lady quickly filled in all our paperwork for us and after ten minutes we were called up to the teller to pay.

On returning to the hostel we asked the staff to call and confirm with the embassy that we could infact collect the visas the next day.

At 4:05pm the next day we left the embassy kiosk smiling in possession of our Mongolian visas and having completed our three missions.

Of course we did other things in Beijing not just house work missions. We visited the world famous Tianamen Square, flanked with a massive picture of Chairman  Mao.  There were so many people milling around the massive square, many tourists and many touters selling photos. Surrounding the square are some amazing buildings (which were rather obscured thanks to the smog) the forbidden city, the national museum … Opportunities for photos everywhere, and guards everywhere making you feel very safe. We watched several patrols of guards walk in formation, many in uniform but some younger men in mufti. We spent some time exploring the square before heading off for lunch. 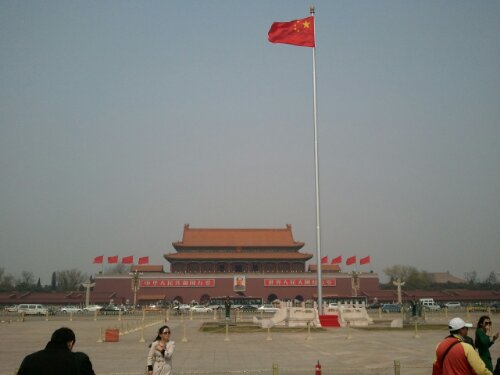 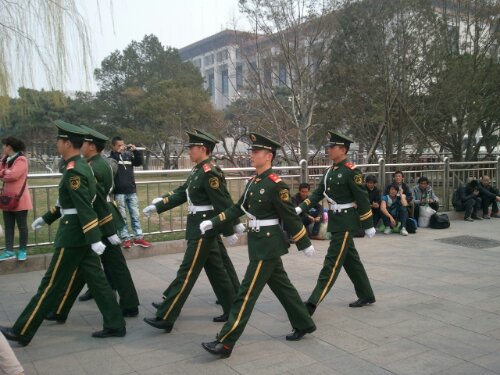 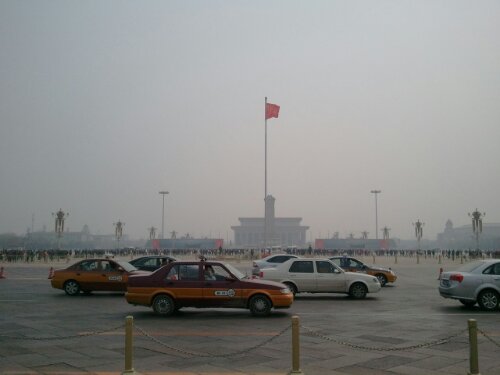 Now I need to talk about food. Before we headed to China one if our friends said, “it’s really hard with food, so I just ate at McDonalds all the time.”( sorry for doubting you Al) We scoffed at the time  but by day 20 here we found ourselves doing much the same. It’s good if you can find a place that has pictures but half the time you have no idea what you are getting, and you even get the girls behind the counters shaking their heads and shooing you out. Lucky for combo specials at lunch time and supermarkets for breakfasts and dinners.

Another sight that we saw was the Temple of Heaven. We spent several hours exploring the temple complex along with thousands of others. The temple was actually a huge complex consisting of a huge park with many different temples and shrines set out along long walkways. There were separate fees to get into every temple but luckily we bought a concession pass. All wrapped up warm we joined line after line to enter each site.  The architecture reminded us of what we had seen in Korea. The painting on the ceilings was in similar colours and had similar designs. The building themselves the main ones at least were very different and circular, this was fascinating. 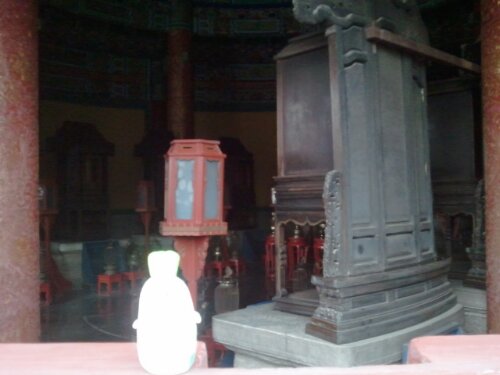 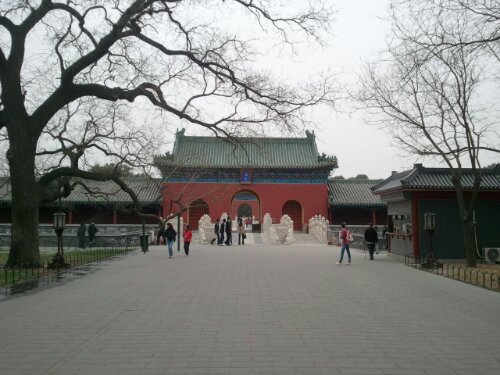 Now I haven’t mentioned it but Beijing is cold, damn cold, so cold that jeans, hoodies, jackets and even hats and gloves were pulled out of the bottom of our packs. For the first time in months Sam was wearing shoes not jandals. 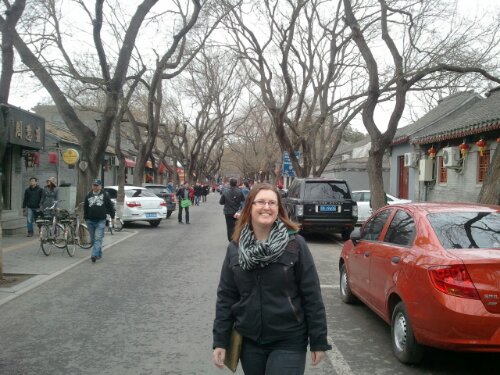 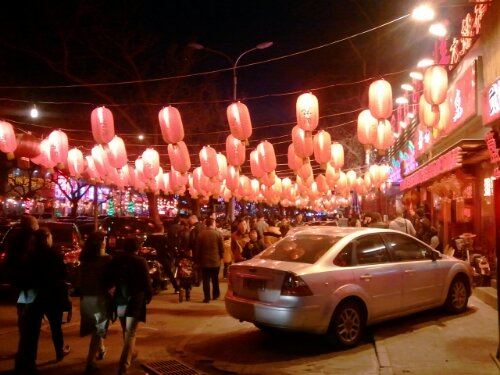 One of the things we were most looking forward to was the forbidden city/palace/ museum (we never quite figured out what it was officially called). We ended up there on a weekend which wasn’t the best but we decided no time was going to be quiet. We entered the city walls over one of three large stone bridges flanked by guards and walked through massive gates until we found ourselves in a huge courtyard. With quite some confusion we managed to find a line to get tickets and after a relatively short time purchased tickets, cheaper than expected, great! Once we were through the next set of gates we were surprised how the number if people seemed to drop off. There is a maze of hundreds of buildings and at times we had too many options. We found ourselves doubling back several times to make sure we didn’t miss anything. Words can not describe the interior of the city and I felt privileged to be allowed to be in this amazing place. I hope our photos do it justice.

We spent many hours and days exploring and enjoying Beijing with its mix of old and new, amazing network of subways and plethora of signs that point one way then stop or suddenly point the other.

Our last three  nights we moved hotels for two reasons 1) we wanted some comfort before 5 nights on a sleeper train and 2) it was much closer to the train station we had to be at a 7 in the morning.

The last exciting thing was the most exciting thing we had to do in China… Visit the Great Wall. Now were had some conflicting information on this. There are a lot of tours to the Great Wall, there are many points you can climb the wall and the question we had was how do we get there without spending all day on a bus or getting stuck with a tour guide taking us through the shops. To be honest we are independent travellers and we like our independence. In the end we found out that rather easily we could get a train from Beijing to Badaling, about a 800m walk to the wall. The scenery was amazing and the train comfortable with so much leg room Sam couldn’t even touch the seat in front of her with her feet. In less than an hour and a half we were there and ready to explore. Now I said it was cold right, well the wall was not cold but cold and windy, freezing!

We purchased out tickets and decided to head along the road less travelled. Yes we hate being surrounded by millions of people. What we noticed about the wall was that the flat bits were not flat they were damn steep and combined with the wind this made it hard going. We noticed after a couple of hundred meters the numbers had considerable dropped off and by the time we reached the end of the restored section there were hardly any other tourists, great! The views were spectacular and trying to grasp the scale of the wall is impossible. That’s one tick off the bucket list.

Next stop Trans Siberian and Moscow!!