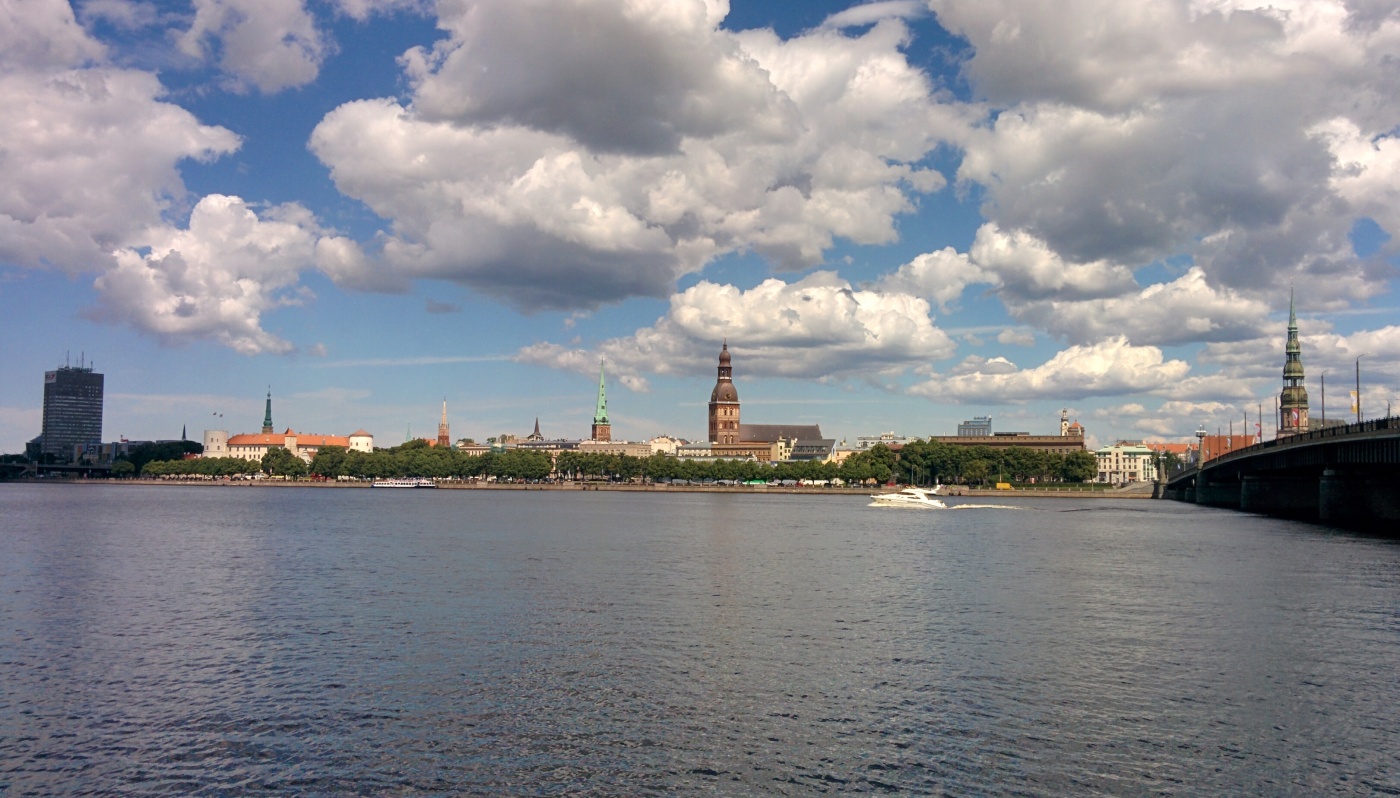 Riga, Riga, Riga. What can we say? We went to Riga wanting to like it. Everything that we had heard was wonderful. Everyone we had talked to about it gave it rave reviews.

And yes, it is a very beautiful place, with several similarities to our hometown of Christchurch. Around the old town there’s a small river flowing through many parks which were perfect for walking and relaxing in. It also has <insert scratched record sound> an old town complete with pesky cobbled streets and beautiful buildings everywhere. 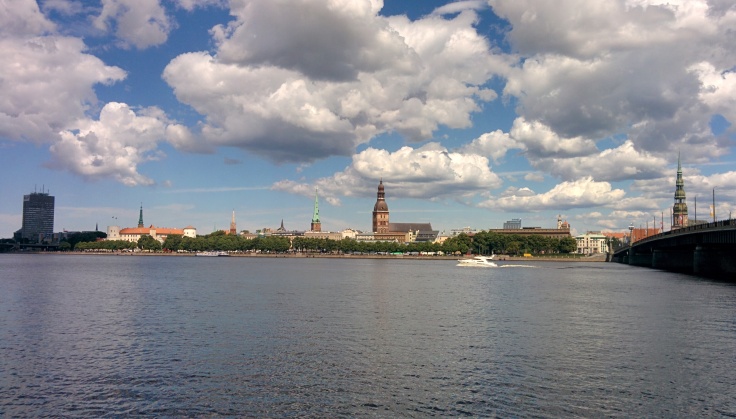 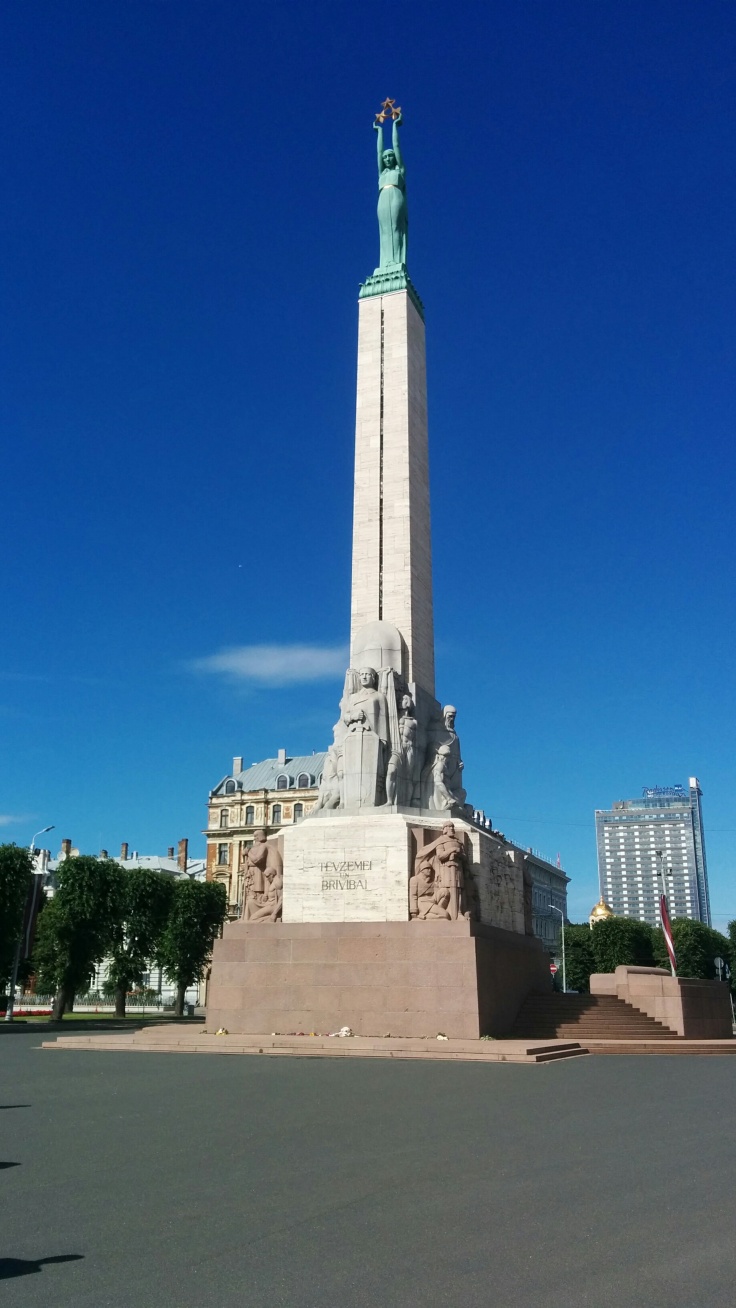 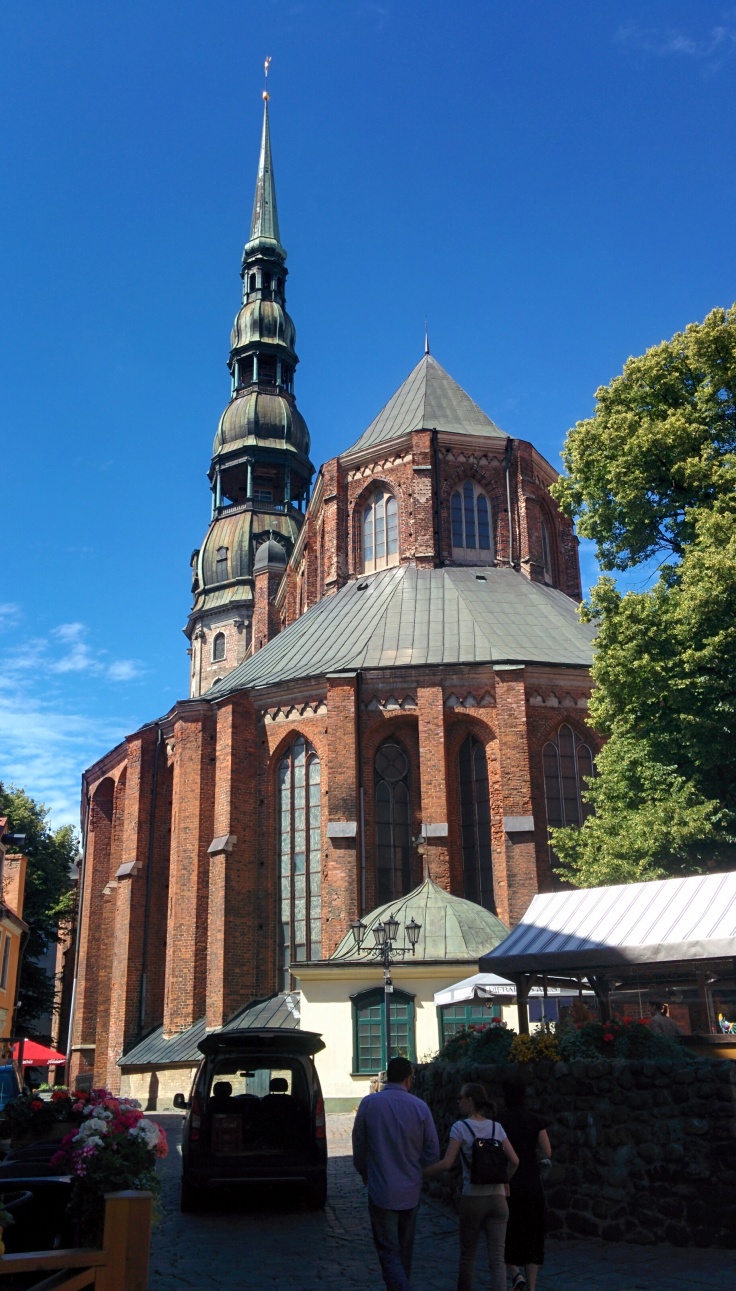 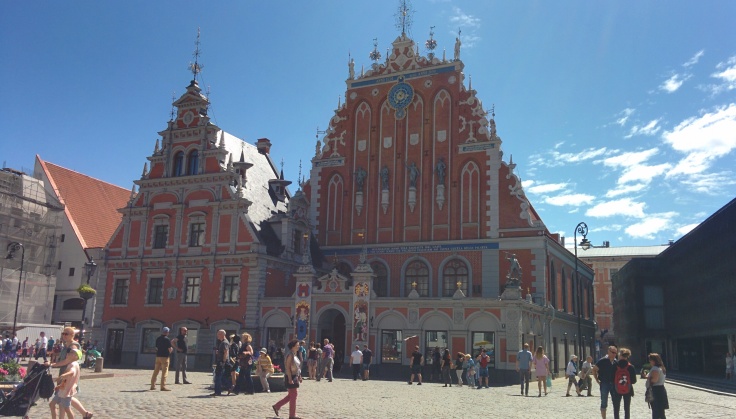 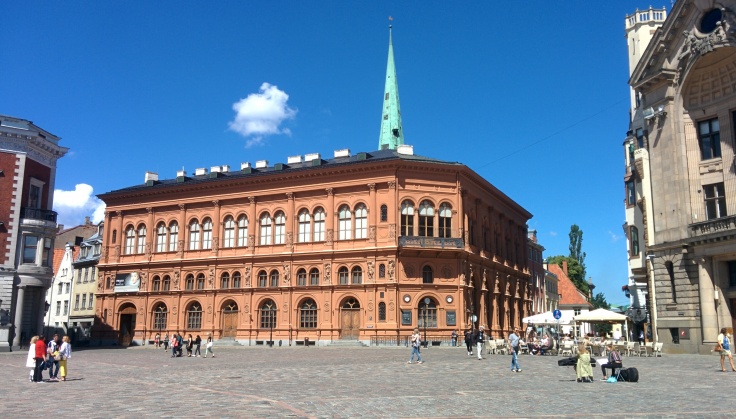 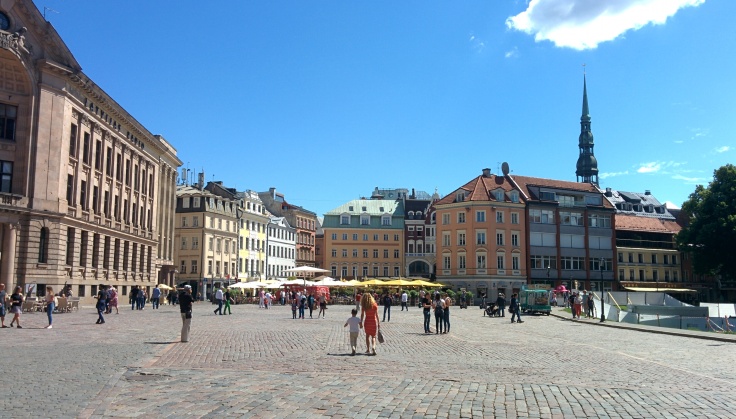 It also had one other thing that we were noticing a lot of in Europe: roadworks. Ye God’s! We had not seen a place without roadworks in over 6 weeks. Literally. It was like it was the end of the financial year and everyone had to spend their budget before they lost it. And Riga’s roadworks were the same as every other Western nation: one worker digging a hole, one watching, one leaning on a shovel, one talking on the walkie talkie to the stop/go man, one sitting in a truck, and one supervising. So everyone was hard at work. But fortunately that did not detract from the city.

On one of our wanders around the old town we noticed that there were several companies offering boat cruises. What we established was if you get one in the center of town you paid €18 pp, whereas if you jumped on one on the main river it was €12 pp. We intended to go early one morning but found the comfort of bed too alluring so ended up waiting with half a dozen others for the 1pm sailing. Strangely, as the staff allowed us to board the boat, the other people suddenly decided against the cruise and we ended up having a one hour VIP private canal cruise with just us and the captain, a lovely local on his 2 month shore leave from the navy. The cruise was fantastic and very relaxing and we smiled and waved at the other boats full to capacity as we passed along the river. 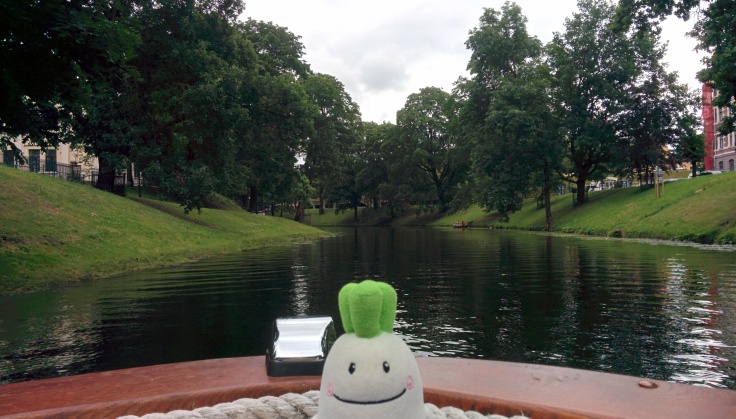 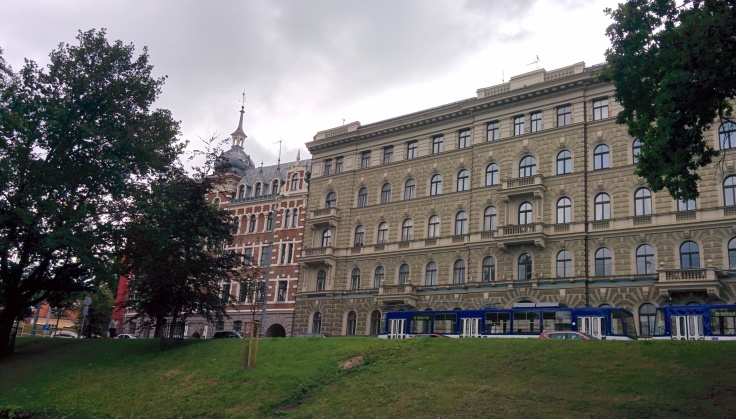 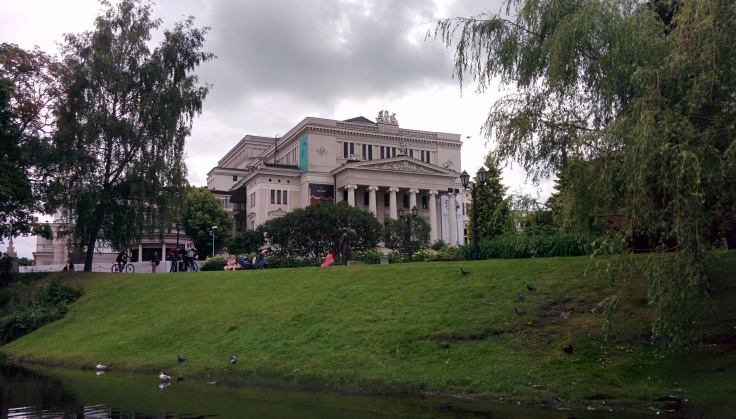 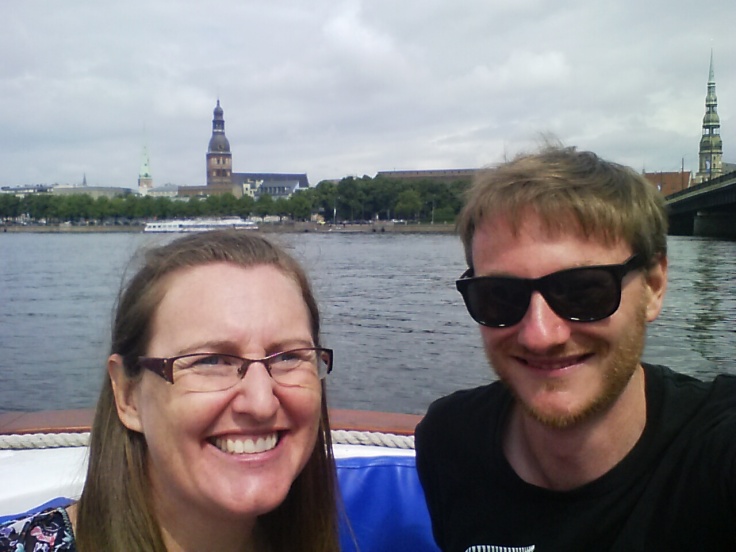 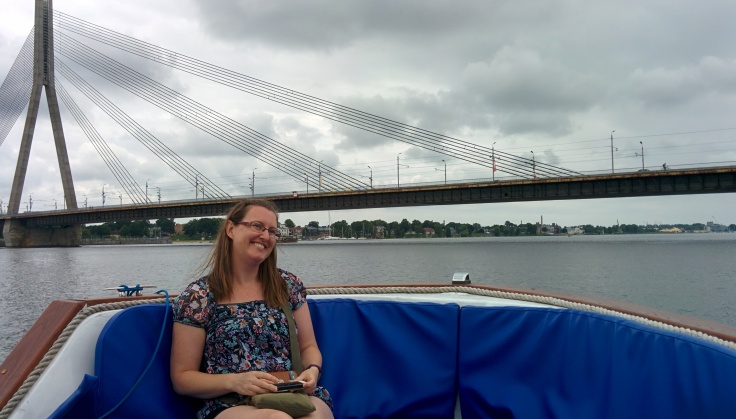 Initially we had planned to visit the town of Sigulda from our next stop of Cesis, but as we were a bit citied out (yes, ‘city’ is a verb!) we decided to take the train from Riga instead. The small town, located in the Gaujas national park, is accessible by several trains per day and is absolutely stunning. A short 20 minute stroll from the train station through lush parks and forestry areas and we found ourselves in the ruins of an old castle. For a surprisingly low €2 we entered the ruins and explored the old buildings. Some recent but minor renovations have added sturdy wooden staircases and viewing platforms but not taken away from the ruins themselves. 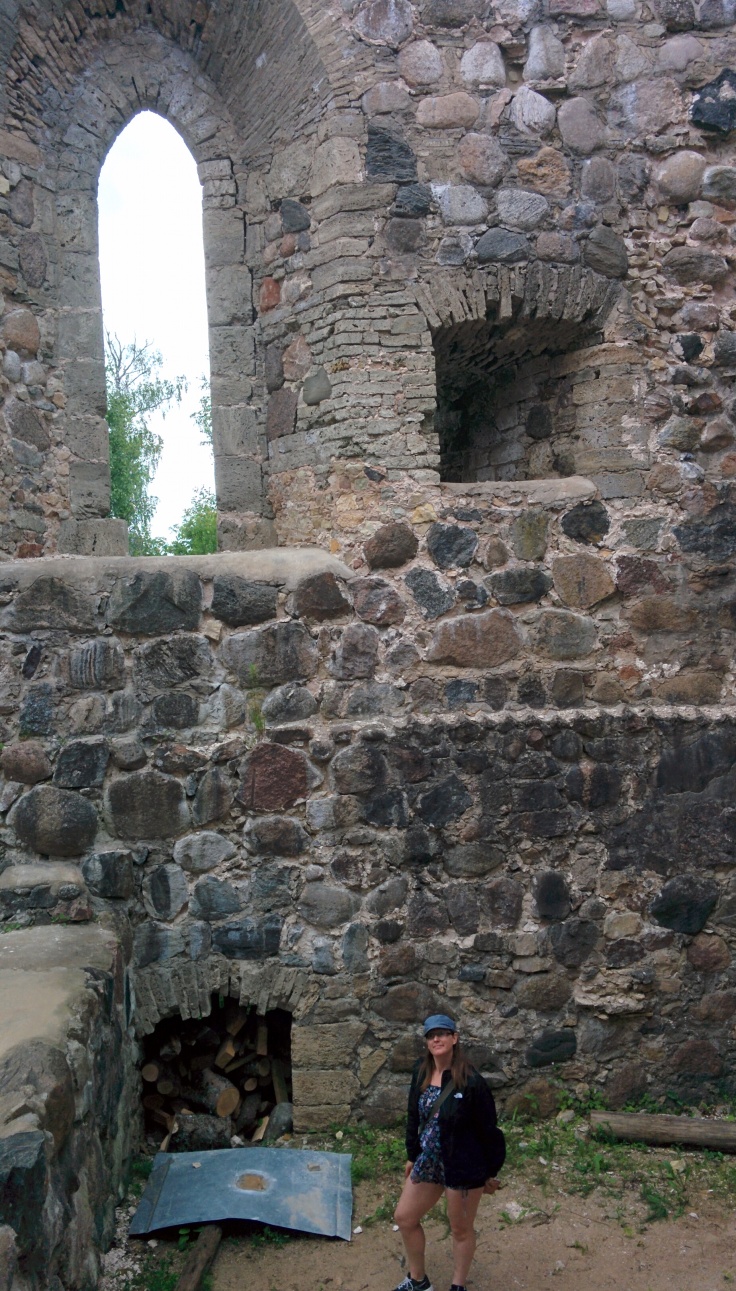 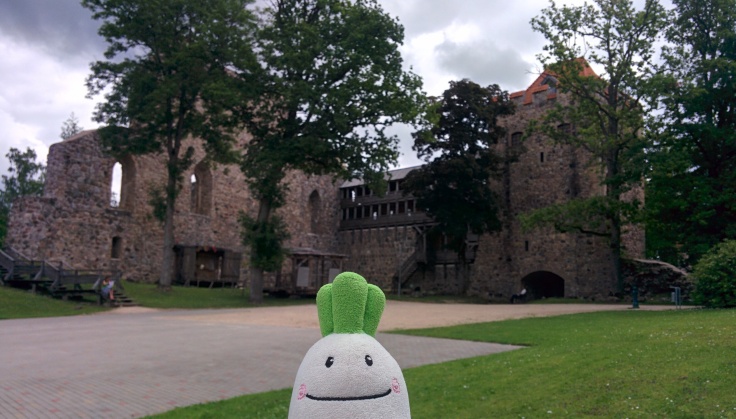 There’s something about being in ruins that haven’t been fully restored that just feels more real. It’s like comparing two 60 year old celebrities…One has had countless plastic surgery operations, botox, and enough work done on them to try and recapture their youth (whilst failing and actually looking like a freaky 1950’s plastic doll that has sat too close to an open fire). The other has not had any surgery, and has just aged naturally. As a result, the second example looks more real than the first, who just looks like a poor representation of what they were.

There was another castle about 2km from the ruins that has been remodeling as a museum but we decided against the visit and instead we headed into the town for a delicious coffee and some afternoon tea before viewing the luge track on the edge of town. All and all a relaxing day. 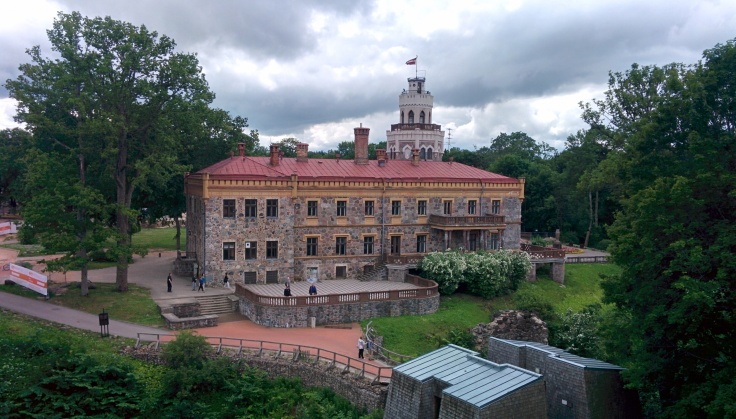 Back to Riga…To be honest, in the end, we did not like Riga. For one, we struggled to find a decent bar or coffee shop in the old town. There were one or two chain coffee shops who offered overpriced and weak coffee, but that’s all that we could find that wasn’t either a fancy restaurant or a bar full of rowdy drunks. The slow and laboured service, which also featured rolling eyes, deep sighing, and completely ignoring us, also didn’t help our feelings in that regard.

Also, outside of the old town, Riga is definitely not a walking city, which isn’t great for us considering we walk everywhere. On many occasions we would be following a footpath and suddenly it would stop, or there was a confusing underpass followed by an overpass then another underpass. This caused us to swear in frustration on more than one occasion.

Riga truly confused us. There is so much to like, and it is a beautiful place. But….Something was missing. It’s like the way the Grand Tour lads describe some cars: technically brilliant, great power, handling like it’s on rails,  perfect in everyway, but just not right…missing that fizz…that x factor. That’s exactly how we felt about Riga in the end. Maybe it’s because we stayed out of the old town. Maybe it’s because we have seen so many other beautiful cities that we have loved. Maybe it’s because we have been travelling for more than 2.5 months nonstop. Or maybe it’s because travel can be a very personal thing and sometimes you don’t build a relationship with a place in the same way that others did for whatever reason.

Really looking forward to our next stop: Cesis.