After a relatively easy tram/train/train/tram combination from Dresden, we arrived at our accommodation in Berlin. The place we stayed was fantastic as it was a 3 bedroom apartment, with each room very artily decorated and with an ensuite. Not to mention a fridge and full kitchen. Perfect!!

We were about a 10 minute tram ride from the centre of the city, and so for the first day we decided to wander around the area where we were staying. Vanni, our host, had given us a long list of ideas and so armed with these we went exploring. One thing we immediately noticed was that Berlin had the sort of vibe where anyone was accepted for whoever they were. There was every stereotype imaginable from skaters, hippies, goths, preppy guys, openly gay guys and girls, the tank top and boob tube brigade, girls with shaved heads and enough metal through their heads that it looked like they had gotten trapped in a fish hook box, mums with kids…anything you could imagine. And yet instead of steering clear of each other, each group co-existed and appeared to completely accept each other.

The following day we ventured into the centre of the city. The first couple of hours was spent shopping and stocking up on much needed clothing. Once in the city, the architecture, museums, monuments and sights were amazing, and every patch of grass was taken up by a half naked person catching some sun. Unfortunately, after spending 3-4 hours exploring, Sam came down with a sudden and nasty tummy bug, possibly from the bratwurst she ate for lunch. So a hasty retreat back to the apartment was made, but not before we endured an agonising 30 minute wait on the tram as one tram broke down, bringing all the trams to a stop. Fortunately not all was lost as that evening we cooked up a delicious pasta meal…the first time we had cooked since December last year! 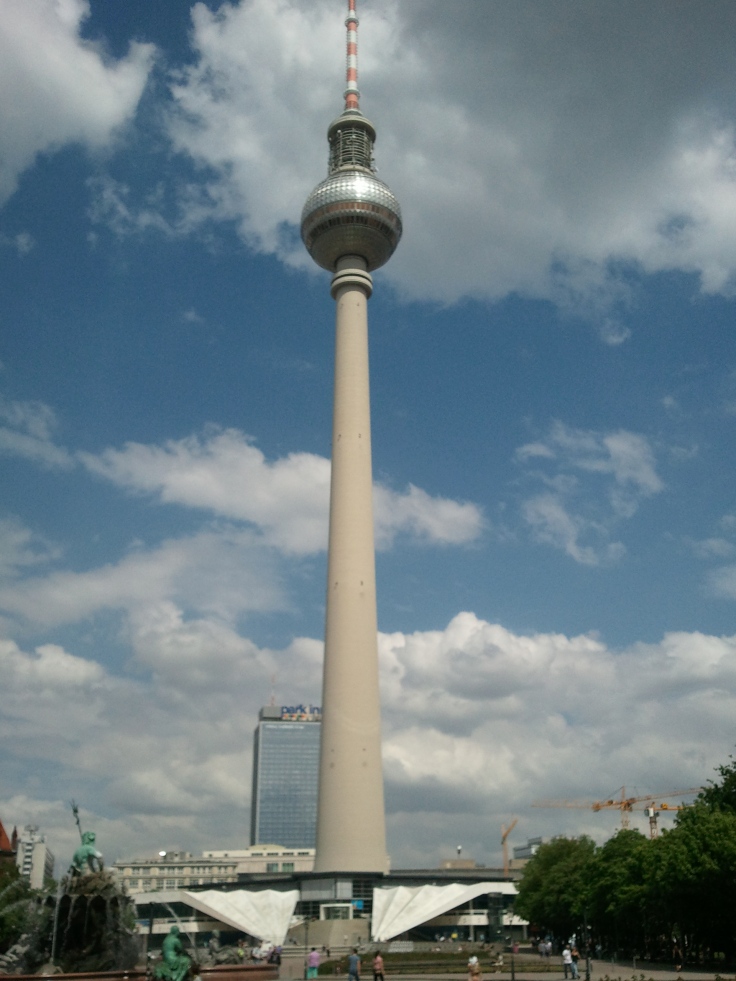 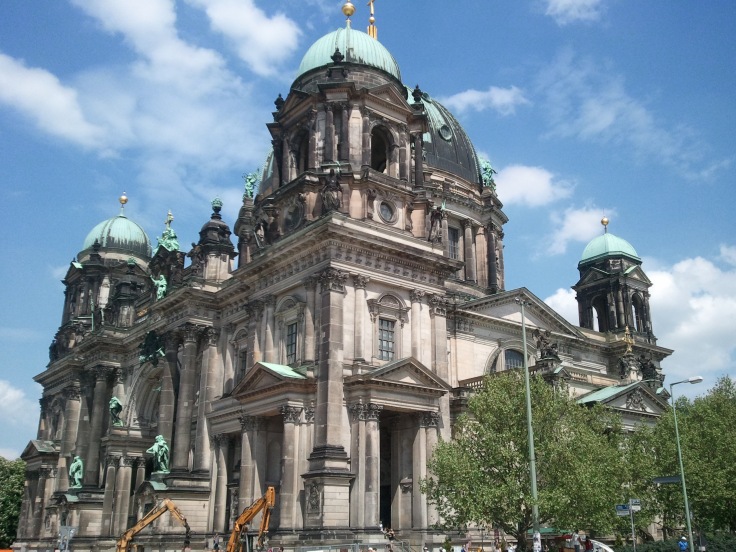 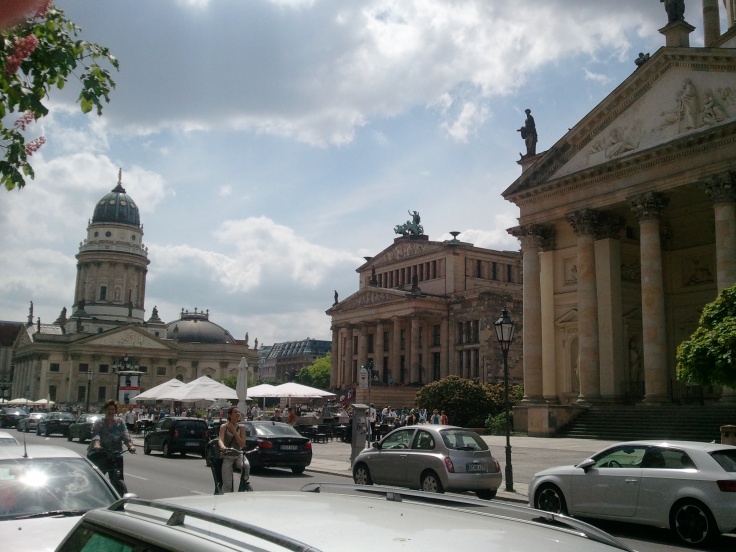 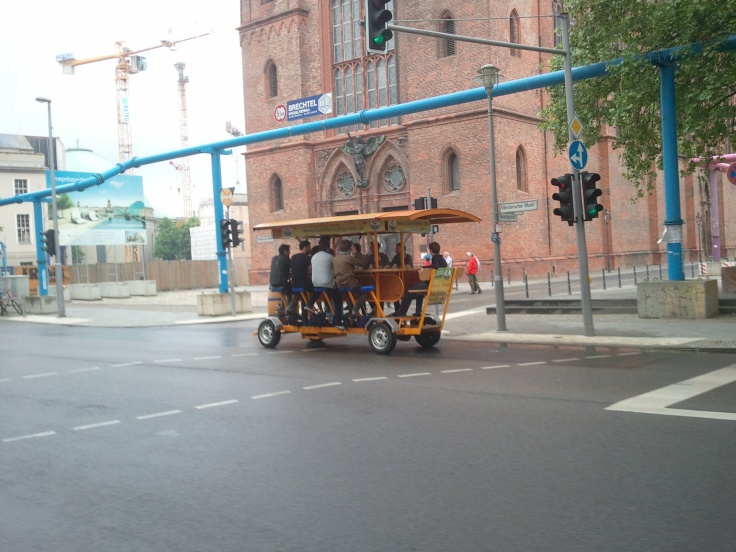 The following day, with Sam all better, we set off again. Unfortunately after an hour or so the rain and freezing cold came, catching us and everyone else by surprise as no jackets were seen and people were shivering everywhere. But despite this we saw areas of the old Berlin Wall and learnt about its history at Checkpoint Charlie, saw the city gate and the old parliament building. To defrost for the afternoon we went to Ikea for a sift. Unfortunately, due to incorrect information at train stations, it ended up taking 2 hours to get back to the apartment instead of 15 minutes.  Pretty frustrating when trains appear to change number after you get on and stations say that a certain numbered train serves the station when in fact it doesn’t! To cap off the day, Sam slipped on the steps of the final train station and sliced her toe open. Suffice to say, she was not a happy camper. 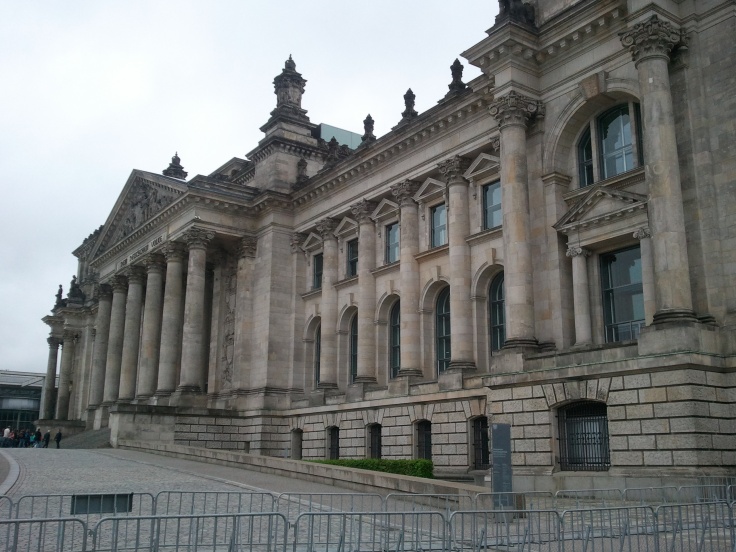 The final day was Sunday, and we decided to not go too far afield due to Sam’s munted toe. So we wandered the streets, went through a flea market, and wandered through a few parks. We had heard that Berliners love to frequent parks, and as it was hot and sunny again, the parks were packed. However, we were rather shocked at the state of the parks…the grass was well over our ankles (and up to Will’s knees in lots of places), weeds seemed to have taken over, there was heaps rubbish strewn all around, and worst of all there was broken glass everywhere. The glass was buried in the grass, the sand in the beach volleyball courts and all over the pavement. Completely unexpected, but the throngs of people seemed to not mind.

Despite our at times harrowing time in Berlin, we did enjoy the city. Certainly it was the most accepting places we have been to, the accommodation made it feel like the we were living there for a short period, and the sights were stunning. But certainly circumstances meant that we didn’t experience the city like we could have. Perhaps a revisit is in order! But for now, it’s off to Cologne.